Houshmand Alipour, from Iran’s Kurdish minority, is at risk of execution after he was sentenced to death on 29 December 2019, following an unfair trial. Mohammad Ostadghader, also an Iranian Kurd, was sentenced to 11 years’ imprisonment in the same trial. Both were denied access to lawyers of their own choosing, and say they were forced to give “confessions” under torture and other ill-treatment. 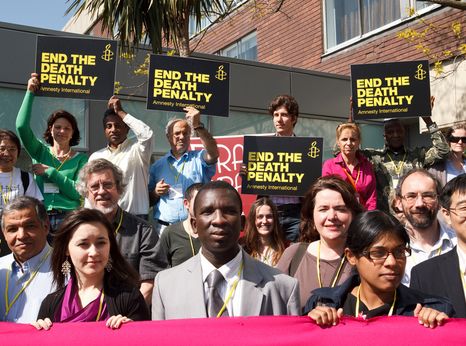 Houshmand Alipour, from Iran’s Kurdish minority, is at risk of execution after he was sentenced to death on 29 December 2019, following an unfair trial. Mohammad Ostadghader, also an Iranian Kurd, was sentenced to 11 years’ imprisonment in the same trial. Both were denied access to lawyers of their own choosing, and say they were forced to give “confessions” under torture and other ill-treatment.

Iranian Kurds, Houshmand Alipour and Mohammad Ostadghader, were arrested by Iranian security forces on 3 August. Following their arrest, they were held incommunicado – unable to contact their family or lawyers – for weeks. Mr. Ostadghader was also shot and injured during the arrest and was initially denied medical care.

On 7 August, four days after the two were arrested, they were shown on Iran’s state news agency giving forced “confessions”, forcing them to incriminate themselves in violation of their rights. Mr. Alipour has since said they were both forced into making “confessions” during interrogations held without a lawyer present. Mr. Alipour told his family the only reason he "confessed" was to stop the torture.

The same day their "confession" video was broadcast, the Iranian Ministry of Intelligence claimed to have arrested members of “separatist and Takfiri” groups, who had attacked a security base in Kurdistan, west Iraq. Takfiri is a term used when a Muslim declares another Muslim has abandoned the essential beliefs of Islam, and therefore should no longer be considered a Muslim.

On 9 August 2018, the Kurdistan Freedom Party (PAK) – a Kurdish opposition group based in the Kurdistan Region of Iraq that has engaged in armed activities against Iran – issued a statement taking responsibility for the attack.

Mr. Alipour’s family said both men are PAK members, but were not involved in armed activities against Iran. They also said the reason the men went to Iran was to raise awareness about PAK among Iranian Kurds.

The Iranian authorities have broadcast videos of forced “confessions” on state television for years, in attempt to justify their actions and gain public support. These “confession” videos are made when detainees are at their most vulnerable – often just after being arrested, while being held incommunicado and subjected to torture and other ill-treatment.

These videos illustrate the extent Iranian forces are willing to go to violate detainees’ rights. Amnesty International’s research shows that state-controlled media works closely with intelligence and security officials and have been involved in both making and spreading “confession” videos.

These broadcast “confession” videos have been used as evidence in court to carry out the death penalty. The most recent example is from 8 September 2018, when cousins Zaniar Moradi and Loghman Moradi, also from Iran’s Kurdish minority, were executed. They were accused murdering the son of a senior cleric on 4 July 2009. They said they were tortured until they were forced to “confess”. Their forced “confessions” were broadcast on state television in November 2010. In December 2010, after a trial lasting just 20-minutes, they were convicted of “enmity against God” (moharebeh) and murder. According to their lawyer, the only evidence against them was their forced “confession” videos. Both men repeatedly denied the accusations.

Broadcasting forced “confessions” obtained through torture is a denial of the human dignity of prisoners and a serious violation of their rights.

Amnesty International opposes the death penalty in all cases without exception regardless of the nature of the crime, the characteristics of the offender, or the method used by the state to kill the prisoner. The organisation considers the death penalty a violation of the right to life and the ultimate cruel, inhuman and degrading punishment.

We suggest targeting Iran’s Supreme Leader (@khamenei_ir) and Minister of Foreign Affairs (@JZarif) on Twitter, as they are both regular users.