On 30 August 2020, the Supreme State Security Prosecution (SSSP) interrogated arbitrarily detained journalist, Solafa Magdy, on new unfounded charges including "joining a terrorist group" as part of the recently opened case (No.855/2020). She is already under investigations by the SSSP over trumped-up “terrorism”-related charges in a separate case. 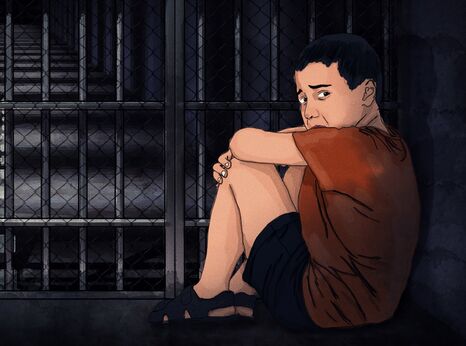 On 30 August 2020, the Supreme State Security Prosecution (SSSP) interrogated arbitrarily detained journalist, Solafa Magdy, on new unfounded charges including "joining a terrorist group" as part of the recently opened case (No.855/2020). She is already under investigations by the SSSP over trumped-up “terrorism”-related charges in a separate case.

Solafa Magdy, Hossam el-Sayed and Mohamed Salah are freelance journalists working for different media outlets. Solafa and Hossam are married and have a seven-year-old son. Amnesty International believes that their detention is solely based on their writings and social media activism defending victims of human rights violations.

In a separate investigation (Case No. 488/2019), Solafa Magdy and Mohamed Salah are facing trumped-up charges of “joining a terrorist group” and “spreading false news”, while Hossam el-Sayed is accused of “membership in a terrorist group”. Between 15 March 2020 and 4 May 2020, the Egyptian ministry of justice suspended all hearings before courts as a measure to prevent the spread of COVID-19. Since early May 2020, “terrorism-circuit” judges have extended the pre-trial detention orders of over 1,600 detainees in the absence of any due process guarantees: defendants were not present in court, while lawyers were prevented from presenting their defence. Solafa Magdy, like other pre-trial detainees, was not transferred to court for detention renewal hearings until mid-July 2020.

In addition to Solafa, the new case ( No. 855/2020) opened by the SSSP also includes other prisoners of conscience, already held in pre-trial detention in relation to separate investigations into similar unfounded “terrorism”-related charges, such as human rights defender Mahienour el-Masry, journalist Esraa Abdelfattah and human rights lawyer Mohamed el-Baqer. Solafa's lawyer told Amnesty International that the SSSP prosecutor accused her of communicating with individuals outside prison to spread rumours and false news. He claimed that she was able to engage in such acts while exercising in the prison courtyard and during court sessions at the prosecution’s office. The lawyers argued that the accusations were baseless as she had been cut off from the outside world for months due to the suspension of prison visits and court hearings by the authorities citing COVID-19 concerns. According to information gathered by Amnesty International, prosecutors have based accusations against Solafa and the other prisoners of conscience mainly on National Security Agency (NSA) investigations case files, which defendants and their lawyers were not allowed to examine. In recent months, the SSSP has been increasingly bypassing court or prosecution decisions to release detainees held in prolonged pre-trial detention by issuing new detention orders covering similar charges.

Since President Abdel Fattah al-Sisi came to power, the authorities have cracked down on independent reporting and arbitrarily blocked hundreds of websites, raided and/or closed the offices of at least nine media outlets and arbitrarily detained scores of journalists. The organization is aware of at least 36 journalists detained at the time of writing solely for carrying-out their legitimate work or for expressing opinions on their personal social media platforms.

The arrest of Solafa, Hossam and Mohamed came in the context of the post-September 2019 protest crackdown, the largest on dissenting voices since 2014. Amnesty International has documented how Egyptian security forces carried-out sweeping arrests of peaceful protesters, journalists, human rights lawyers, activists and political figures in a bid to silence critics and deter further protests. According to Egyptian human rights lawyers and activists, the authorities ordered the pre-trial detention of at least 3,715 people pending investigations on “terrorism”-related charges in the largest single protests-related criminal investigation in Egypt’s history.

In September 2020, small and scattered protests took place in several villages, towns and poor urban communities in Egypt, where protesters took to the streets against the government's policy of demolishing unregistered houses and a law on reconciliation for unregistered houses. Some protestors also chanted against President Abdel Fattah al-Sisi and protested the killing of one man during a police raid in Luxor governorate. Egyptian security forces responded with teargas, batons, birdshot and on at least one occasion live ammunition, and arrested hundreds of protestors and bystanders Hundreds remain in detention pending investigations on flawed "terrorism" and protest related charges.