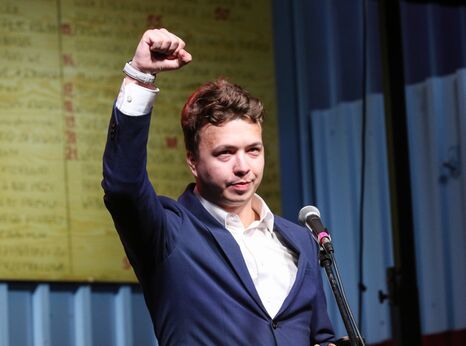 Raman Pratasevich is a Belarusian journalist, co-founder of the popular NEXTA Telegram channel, which became a key tool for information-sharing, mobilization and coordination of peaceful protests against widely-disputed presidential election results in August 2020. He left NEXTA in September 2020 and has been editing the Belamova Telegram channel since then.

Since 2019, Raman Pratasevich has been living outside Belarus out of fear for his safety. On 5 November 2020, he was charged with "organization of mass disorder", "organization of group actions that severely violate public order" and "inciting hatred towards social groups" (these “groups” being police officers and government officials). On 19 November, he was put on the country's official "List of Terrorists" becoming the first Belarusian citizen included on the list.

On 23 May 2021, Raman Pratasevich was travelling to Vilnius from Athens with his partner Sofia Sapega. When their RyanAir flight was flying over Belarus, it was diverted by Belarusian air traffic controllers and ordered to land in Minsk Airport, ostensibly due to a report of a bomb on board. A fighter jet belonging to the Belarusian Air Forces was deployed “to accompany” the civilian aircraft to Minsk. After landing, Raman Pratasevich and Sofia Sapega were detained by the Belarusian security services, while their Ryanair flight was allowed to proceed to Vilnius, some five hours later. If convicted, Pratasevich is facing up to 20 years' imprisonment. He is also at serious risk of torture and other ill-treatment.

Charges against Sofia Sapega, who is a Russian citizen and a student at the European Humanitarian University in Vilnius, are unknown. As of 25 May, there have been no reports of either of them having been visited by a lawyer.

On 24 May, pro-government media issued a video depicting Raman Pratasevich in a room with his face swollen and with what looks like a bruise on his forehead. In the video, he says that he is being held at SIZO-1 detention centre in Minsk and is “cooperating with the investigators” and “giving confessions related to organization of mass disorders in the city of Minsk”. He also says that he is being treated “in a correct and lawful way by the officers”. Such video “confessions” extracted under torture and other ill-treatment or duress have been repeatedly used by the Belarusian authorities to intimidate their opponents and discredit detainees.

Torture and other ill-treatment have been widespread in Belarus against detained opponents of Alyaksandr Lukashenka, who claims to have won the August 2020 elections. During the protests that followed the disputed election, over 30,000 people were arbitrarily detained. Scores were sentenced to so-called administrative detention or given hefty fines. Hundreds complained of torture or other ill-treatment. Several hundreds have been prosecuted under politically-motivated criminal charges, and many have been given long prison sentences following unfair trials.

The number of individuals prosecuted under criminal charges as part of the authorities’ crackdown on peaceful dissent is constantly growing.