Iranian Kurdish prisoner Heidar Ghorbani is at imminent risk of execution for “armed rebellion against the state” (baghi), despite serious fair trial violations and the trial court confirming that he was never armed. In August 2021, the Supreme Court rejected his second request for judicial review. His conviction is based on torture tainted “confessions” obtained while he was forcibly disappeared. 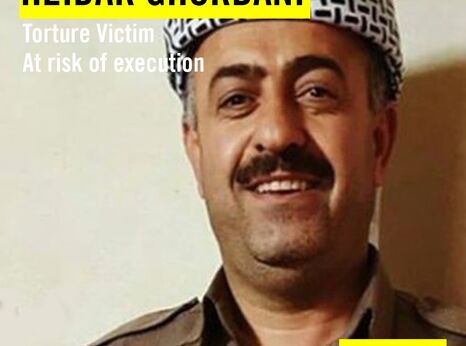 Iranian Kurdish prisoner Heidar Ghorbani is at imminent risk of execution for “armed rebellion against the state” (baghi), despite serious fair trial violations and the trial court confirming that he was never armed. In August 2021, the Supreme Court rejected his second request for judicial review. His conviction is based on torture tainted “confessions” obtained while he was forcibly disappeared.

On 12 September 2020, Heidar Ghorbani’s lawyers appealed to the head of head of judiciary to exercise powers granted to him under Article 477 of Iran’s Code of Criminal Procedure and order a review of the case on the basis that the verdict issued was evidently in contravention of both Iranian and Shari’a law. His lawyers said the head of judiciary sent the request to a branch of the Supreme Court and that the Supreme Court subsequently rejected the request for judicial review in early August 2021. Article 287 of the Islamic Penal Code states: “Any group that takes up arms against the foundations of the Islamic Republic of Iran is considered baghi and in the event of resorting to the use of arms, its members shall be sentenced to death.” According to information in Heidar Ghorbani’s casefile and obtained by Amnesty International, the investigator of the case, who works in the office of the prosecutor in Kurdistan province, stated in writing on 1 February 2017 that there is no evidence to charge Heidar Ghorbani with “armed rebellion against the state” (baghi). However, the prosecutor insisted that the indictment list this charge. Heidar Ghorbani has denied he was a member of Kurdish Democratic Party of Iran, an armed Kurdish opposition group.

Heidar Ghorbani was arrested on 12 October 2016, by about 10 ministry of intelligence agents who raided his home and failed to show an arrest warrant. For nearly three months, his family were denied any information about his fate and whereabouts and did not even know if he was dead or alive. On 5 January 2017, he was allowed to briefly call his family, but his whereabouts continued to be concealed. After this phone call, his family was again kept in the dark about his fate and whereabouts until April 2017 when he was transferred to the central prison in Sanandaj. Following his transfer to Sanandaj prison, Heidar Ghorbani revealed that while forcibly disappeared, he had been held for several days in a detention centre in Kamyaran, Kurdistan province, run by the Investigation Unit of Iran's police (Agahi), and then transferred to a ministry of intelligence detention centre in Sanandaj, where he was held in prolonged solitary confinement, in violation of the absolute prohibition of torture and other ill-treatment, for several months. He also said that during this time his interrogators kicked and punched him, deprived him of sleep, and forced him to lay on the ground while they walked over his chest, causing him a feeling of suffocation. On 8 March 2017, Press TV, an Iranian state-owned outlet that broadcasts in English, aired a propaganda video entitled “The Driver of Death”, which featured the forced “confessions” of Heidar Ghorbani without his knowledge. In addition to violating the right to presumption of innocence and to remain silent during interrogations and trial, the mental anguish caused to detainees and their families by such “confession” videos, which dehumanize and demonize the victims and purport to show their “guilt” for serious crimes, violates the absolute prohibition on torture and other cruel, inhuman and degrading treatment under international law. In addition to his trial before the Revolutionary Court, Heidar Ghorbani was also tried before Branch 1 of Criminal Court 1 of Kurdistan province for aiding and abetting murder, attempted kidnapping, assisting the direct perpetrators to escape. In this trial, he was sentenced to a total of 118 years and six months and 200 lashes on 6 October 2019.

Under international human rights law, the proceedings in capital cases must scrupulously observe fair trial standards, and particularly in view of the irreversible nature of the death penalty. All individuals who risk facing the death penalty must benefit from the services of competent defence counsel at every stage of the proceedings. They must be presumed innocent until their guilt has been proved based upon clear and convincing evidence leaving no room for an alternative explanation of the facts, in strict application of the highest standards for gathering and assessing evidence. In addition, all mitigating factors must be taken into account. The proceedings must guarantee the right to review of both the factual and the legal aspects of the case by a higher tribunal. Imposition of the death penalty following criminal proceedings that fall seriously short of fair trial standards constitutes an arbitrary deprivation of the right to life and may even amount to an extrajudicial execution. In a 3 September 2021 statement, several UN human rights experts stated “In the case of Heidar Ghorbani, many foundational guarantees of fair trial and due process enshrined in international human rights law appear to have been violated”.