Since April, Maltese authorities have transferred asylum-seekers rescued in the central Mediterranean to private vessels used for coastal tourism and, under the pretext of COVID-19, have been holding them for days on those ferry boats off Malta’s territorial waters. The situation on board is becoming unbearable as the boats are not suited for long stays. Maltese authorities should end their arbitrary detention and immediately disembark them in Malta, ensuring they can apply for asylum and access adequate reception. 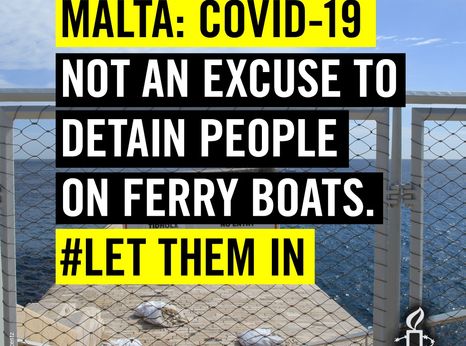 Since April, Maltese authorities have transferred asylum-seekers rescued in the central Mediterranean to private vessels used for coastal tourism and, under the pretext of COVID-19, have been holding them for days on those ferry boats off Malta’s territorial waters. The situation on board is becoming unbearable as the boats are not suited for long stays. Maltese authorities should end their arbitrary detention and immediately disembark them in Malta, ensuring they can apply for asylum and access adequate reception.

Since April 2020, Malta has used Covid-19 to justify a decision not to authorize the disembarkation of people rescued at sea in Malta. This has been followed by incidents where boats in distress have been left unattended at sea for days and one incident where Malta reportedly instructed private boats to rescue people at sea and subsequently disembark them in Libya, which is now the subject of a criminal investigation in Malta, involving the Prime Minister himself. Push-backs to Libya constitute a breach of international and European human rights and refugee law.

Determined to prevent further disembarkations in the country, the Maltese government has also moved to the use of private vessels, owned by the companies Captain Morgan and Supreme Cruises, normally used for daily cruises along Malta’s coast, to hold people rescued at sea under its coordination. As of 28 May, about 425 people rescued at sea in separate incidents on 29 April, and 7, 22, 25 and 27 May are aboard four private vessels.

A group of 57 men, rescued on 29 April by a fishing boat, were transferred the following day to the Europa II. Two further groups, of 45 and 78 people respectively, were rescued on 7 May by a speedboat of the Armed Forces of Malta and a fishing boat: while families, including 18 women and children, from these groups were allowed to disembark in Malta, the remaining 105 people were transferred first to ferry boat Bahari and then, on 15 May, to ferry boat Atlantis. People onboard the two cruise ships, which are pleasure boats not designed to cater for long stays, have been left there since. Maltese authorities have provided mattresses and food and it is reported that Covid-19 tests have been carried out. However, media and local NGO reports indicate that the situation of the people on board is inadequate and leading to growing distress, depression and anxiety, with reports that some people are on hunger strike and others have attempted suicide.

More recently, on 22 May, the Armed Forces of Malta rescued 140 people in two separate operations. The Maltese government chartered the vessel Bahari again, and transferred the rescued people to the ferry boat, with the exception of 19 people including children and pregnant women, who were brought ashore for humanitarian reasons. On 25 May, another group of 90 people were rescued by a patrol boat of the Armed Forces of Malta and transferred to the ferry boats the following day. On 26 May, eight children and 18 women were allowed to disembark in Malta. Following the rescue of another group of 75 people by the Armed Forces of Malta on 27 May, the Maltese government decided to charter a fourth vessel, Jade, owned by the company Supreme Cruises.

As of 28 May, about 425 people remain detained offshore on four ferry boats. While people onboard are entitled to seek asylum in Malta if they wish to do so, Maltese authorities have not allowed UNHCR to visit them. Malta's Agency for the Welfare of Asylum Seekers (AWAS) has reportedly not had access either. People onboard have no access to the outside world, to doctors or lawyers of their choice. This renders it impossible to have precise information about their number and identities. Notwithstanding that the Maltese authorities have used the Covid-19 pandemic to justify the decision to close the country’s ports, they are clearly not using the detention of refugees and migrants on the private vessels outside territorial waters as a quarantine measure. No end date for their detention has been provided and Malta has instead engaged in tense negotiations with the European Commission over the relocation of these people.

The Maltese government has not clarified the specific reasons and legal basis for such measures, beyond generic references to a purported inability of the country to assist refugees and migrants during the Covid-19 crisis. Instead, it has threatened not to allow people to disembark until other EU Member States offer to assist them. Such actions appear to breach the right to seek asylum and the right to liberty of the refugees and migrants affected. Measures limiting certain human rights, for example for the protection of public health, may at time be necessary; however, they should be set out in law and be proportionate and necessary to the pursuit of a legitimate aim. They should furthermore respect the principle of non-refoulement and other binding obligations under international law, including the right to seek asylum.

Malta has a long record of human rights violations against refugees, asylum-seekers and migrants attempting to reach the country by boat from North Africa. This has included the use of arbitrary detention for people who have made it to Malta. Malta has also shirked responsibility for rescuing people at risk of drowning in the central Mediterranean. In recent years, Malta has actively supported EU policies aiming at outsourcing to Libya search and rescue responsibility over the central Mediterranean, even if this has resulted in people intercepted by Libyan authorities being disembarked in Libya and arbitrarily detained in centres where they face horrific conditions and the risk of torture. While such actions have dramatically reduced the number of people crossing the central Mediterranean and arriving in Europe by boat, over 3,400 people reached Malta by sea in 2019, and over 1,200 so far in 2020.