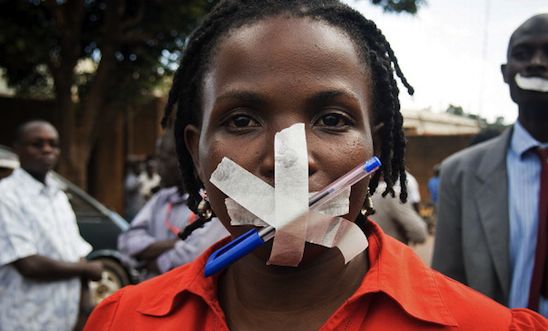 A protestor at the Daily Monitor newspaper poses in Kampala on May 20, 2013 © AFP/Getty Images

A new wave of laws brought in under Uganda's President Museveni since 2012 are denying free speech and freedom of association for all Ugandans.

As the country prepares for elections in 2016 - which, if he's successful, would mark Museveni's 30th year in power - we are concerned that Ugandan people are unable to challenge their political rulers, speak freely and dispute a group of new human rights-denying laws.

The famous Anti-Homosexuality Bill (AHA) brought the world’s attention to entrenched legal and social discrimination against the lesbian, gay, bisexual, transgender and intersex (LGBTI) community in Uganda, and popular political moves to strengthen punishment against the ‘crime’ of homosexuality.

It was already a crime to be gay in Uganda, but the Anti-Homosexuality Bill upped punishment to life sentences and extended the law to cover ‘promotion’ of homosexuality, so widened the remit of arrest to healthcare workers and lawyers and activists associated with LGBTI rights issues. Passed by Uganda’s parliament in December 2013, President Museveni after some wavering signed the Bill into law in February; it was later annulled on a technicality in August of this year.

In the five months during which the Anti-Homosexuality Act was in force, Ugandan police arrested numerous people for identifying as LGBTI, and people who were identified – accused, even – by others as being gay, lesbian or transgender. Some people were arrested when reporting crimes against them; others were beaten and groped by police and other detainees in custody.

The Act legitimised and stoked a public movement of homophobia, emboldened and led by politicians and political figures determined to isolate and punish individuals simply for identifying as anything other than heterosexual, and the gender they were born. We spoke to people who have been evicted from their homes, lost their jobs and subjected to mob attacks as a result of the (now nullified) law.

Religious leaders have played a key role in stoking homophobia. Pastor Ssempa, for example, led a rally of thousands at a Kampala airstrip in March this year, to ‘give thanks’ for the discriminatory law. A fervent religious-led anti-gay movement, coupled with a lack of information about LGBTI issues or the Act itself, means that homophobia sentiment and homophobic attacks and discrimination have risen dramatically this year.

Wider crackdown on freedoms for Ugandans

The Anti-Homosexuality Bill is one of three laws passed by Museveni’s government in the past couple of years that severely limit free speech for all Ugandans, fuel discriminatory abuses and have left individuals unable to seek justice.

The Public Order Management Act (POMA) was passed in October last year. Apparently to ‘provide regulation of public meetings’ (defined so broadly as to include any public gathering), the law has been used to restrict freedom of assembly and stifle political opposition in the past year.

The Ugandan police have used their new sweeping powers to break up peaceful protests, arbitrarily detained activists for their ‘potential’ to disrupt public order, and suppressed gatherings of political opposition groups.

The Anti Pornography Act (APA) was made law in December 2013. Ostensibly created to curb broadcasting and trading of pornography, it has been vaguely worded and its scope poorly defined. As a result – and thanks to politicians’ statements and misinformation in the media – the APA has been used to legitimise harassment of women by the public and police officials.

Early drafts of the Act included as pornography the ‘display…of sexual parts of a person such as breasts, thighs, buttocks or genitalia’; this wording was removed from the final Act, but nevertheless the law has been interpreted as the banning of revealing clothing for women in Uganda.

It has fuelled cases of public harassment: in the days after the Anti-Pornography Act was signed, there were a number of cases where women were attacked by mobs, harassed by the police, and one lawyer was threatened with arrest because of her clothing.