Thanks for supporting Trevor and Barry 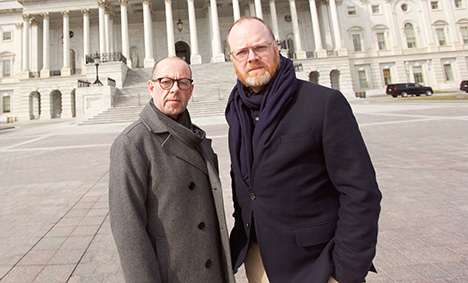 Thousands of you sent messages of support for Trevor and Barry - two journalists from Northern Ireland who were arrested after exposing police collusion in the Loughinisland massacre.

In May a court ordered that a police raid on their offices should not have happened, and shortly afterwards the Police Service of Northern Ireland dropped the investigation.

This is a great victory for press freedom in the UK. Trevor and Barry were only doing their jobs as journalists and the investigation should never have happened.

Your support helped us raise awareness for their case and ensure that justice was done. We simply couldn't repay you.

In 1994 a pub in Loughinisland, Northern Ireland was showing a World Cup match between the Republic of Ireland and Italy.

Suddenly, two paramilitaries walked in, spraying the crowd with bullets from an automatic weapon. Six innocent people lost their lives.

It was later discovered that the police colluded in covering up this awful crime by destroying evidence and failing to carry out a proper investigation. To this day, no one has been brought to justice.

In June 2016 a Police Ombudsman report confirmed police collusion in the Loughinisland murders. At this time Trevor and Barry were working on a film called ‘No Stone Unturned’, directed by Oscar-winning filmmaker Alex Gibney. It would tell the full story behind the attack and police collusion with the paramilitaries involved.

Exposing the shocking extent of state collusion, the film caused a huge reaction when it premiered at the New York Film Festival in October 2017.

In August 2018, an estimated 100 police officers from the Police Service of Northern Ireland (PSNI) and Durham Constabulary raided the two journalists’ homes and offices. They seized documents, phones and computers. They arrested the men, apparently in connection with breaching the Official Secrets Act, in relation to documents which had been leaked to them.

In May 2019 a court ordered that the police seizure should not have happened. But Trevor and Barry remain under arrest.

We are concerned that the arrest of these journalists, in connection with their work investigating grave human rights abuses within the UK, undermines freedom of expression and freedom of the press.

Criminal laws are being increasingly misused around the world to restrict the vital work of journalists. It is extremely worrying that we are now potentially seeing this happen here at home.