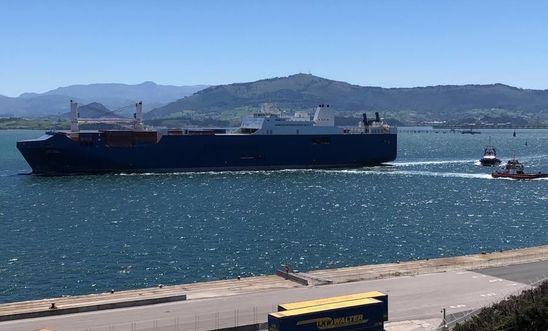 The ‘Bahri Yanbu’, laden with Belgian weapons, docked at Tilbury last week Is now headed to Italy after being blocked by protesters in France ‘Was there a transit licence for this vessel to dock at a UK port?’ - Oliver Feeley-Sprague Responding to the latest news concerning the voyage of a Saudi Arabian vessel - the Bahri Yanbu - laden with arms and currently sailing toward the port of Genoa in Italy, Ara Marcen Naval, Amnesty International’s Deputy Director for Arms Control and Human Rights, said: “This is a serious test of EU countries’ resolve to uphold their obligations under the Arms

Amnesty International will hand in a petition tomorrow signed by nearly 100,000 people across the globe calling on the European Commission to take action to end the continuing widespread discrimination faced by Roma people across Europe. The 93,165 signatures were collected over the last two months as part of Amnesty’s “Human rights here, Roma rights now” campaign. Meanwhile, today Roma activists are holding a special breakfast outside the European Commission in Brussels. The ‘Start your day with justice and human rights’ breakfast at the Berlaymont provides an opportunity for Commission

Music again and a Protestzanger!

A singer I have liked for years is June Tabor and she is doing a concert in Gent, Belgium on 10 Nov. 2008 with Huw Warren and Mark Emerson. The concert is to mark four important anniversaries including 90 years since the 1918 Armistice...

Council of Europe report: European countries must do more to prevent rendition flights

Amnesty International (AI) welcomes the call from the European Union Justice Commissioner Franco Frattini for European governments to cooperate fully with the Council of Europe's investigation into 'extraordinary renditions' and secret detention centres. The Council of Europe's interim report makes clear that the response from some European countries has not been sufficient. The governments of both the UK and Romania, for example, have cited their confidence in assurances offered by the US Secretary of State, Condoleezza Rice. Amnesty believes that such assurances cannot be regarded as