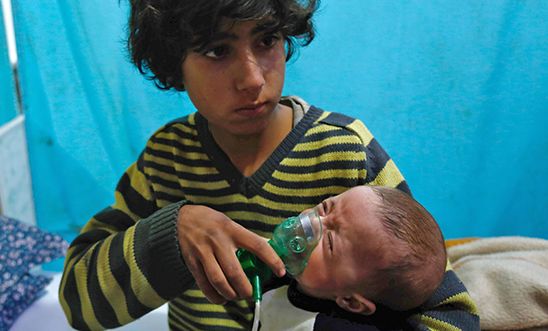 The last few days have seen the deaths of dozens of Syrian civilians in what appears to be yet another sickening chemical attack – almost a year to the day since a shockingly similar attack took place, which claimed over 80 lives.

Once again, the world watched on horrified as footage emerged over the weekend of children and adults struggling to breath, and others who had already lost their fight to survive.

"I lost consciousness. I couldn't breathe any more; it was like my lungs were shutting down." https://t.co/DQtvWnB1uE

Reports have flooded in of around 70 people having died this way in the city of Douma, while hundreds more have been injured. According to the White Helmets, the Syrian volunteer search and rescue organisation, these figures are likely to rise.

As of 23 March, Douma became the last opposition stronghold in Eastern Ghouta, a besieged region of Syria.

On 5 April negotiations failed between Russia and armed opposition group Jaysh al-Islam, leading to the Syrian regime escalating its attacks on civilians already in Douma.

The lack of accountability in #Syria is a license to kill! When negotiations failed in #Douma, the Syrian gov. punished civilians in a classic strategy of 'surrender or die.'More than 40 ppl suffocated to death following chemical weapon attacks last night. https://t.co/v9IqTiqfZH pic.twitter.com/ZSqX2u3QsQ

This collective punishment has been used repeatedly by the authorities as a means of forcing armed groups to surrender – meaning that civilians in Syria have continued to pay the highest price.

To make matters worse, both Russia and China have protected the Assad’s regime by systematically blocking the UN Security Council from taking concrete measures to hold war criminals to account.

This appears to be yet another horrific chemical attack, a clear war crime. Under international humanitarian law, the use of chemical weapons is absolutely prohibited.

When last year’s chemical attack took place in the city of Idlib, 40,000 Amnesty supporters helped us apply pressure on the UN to investigate what happened so the perpetrators could be brought to justice.

Since then, over 250 individuals have been blacklisted by the EU for their role in atrocities, including high ranking Syrian military officials and scientists. Also, the UN’s chemical watchdog, the Organization for the Prohibition of Chemical Weapons (OPCW) launched an investigation into it.

A licence to kill

Syria has become the grim textbook example of the high price civilians pay when mass atrocities repeatedly go unpunished. The suffering of civilians must never be tolerated.

We will continue to demand justice for the victims of these chemical attacks and their families. We’re urging that:

Without justice and accountability, repeated attacks like this risk happening again and again. We’ll keep the pressure up until that risk no longer exists.