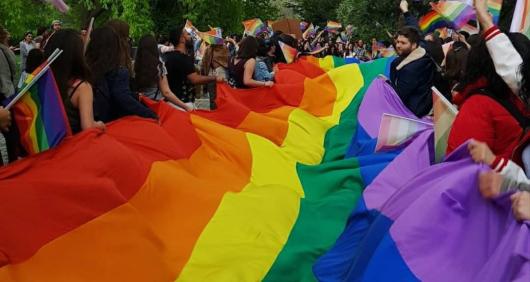 Police violently broke up the student-organised Pride march on 10 June at Middle East Technical University (METU) Campus in Ankara, detaining 37 students after dragging some of them on the ground. The students were later released. Amnesty International called for the university rectorship to respect right to peaceful assembly of the Pride participants.

On 7 June, the METU rectorship sent an email on to all of the university's students, warning them that their planned campus-based Pride march would be met with police intervention.

Amnesty International called on the university rector to ensure that the Pride march planned to take place on 10 June could go ahead without any restrictions, including possible intervention by police. We reminded the rectorship that their attempt to ban the march represented an unjustifiable restriction to the rights to freedom of expression and peaceful assembly of METU students and staff; and that the grounds cited in their email to students, namely the ‘damage that would be caused to the University’s prestige’ were not among those permitted under Türkiye’s domestic laws, nor permissible under binding international human rights laws and standards.

On the day of the march, the authorities deployed riot police and plain cloth officers to the campus as well as busses to transport detained students, which were positioned inside the campus before the start of the Pride march. When a few hundred of students started to march, riot police intervened to break up the peaceful protest by using excessive force including firing pepper balls. As a result, 37 students were arrested after some of them were being dragged on the ground. Some reported to being ill-treated while they were being detained or in detention.

Amnesty International’s Urgent Action was important to put pressure university management to reverse their decision to arbitrarily prevent the campus based Pride. The METU rectorship issued a statement post-event trying to justify their decision not to allow the march and calling for police action. Amnesty will monitor any criminal investigation and prosecution that may occur.

Speaking to Amnesty International, METU LGBTIQAA+ Solidarity expressed their deep gratitude to all those who took action on their behalf:

“As METU LGBTIQAA+ Solidarity, we thank to everyone who gave support and put effort to 10th METU Pride that we realized under state repression and police violence. We believe that the fight for LGBTIQAA rights in METU and Turkey can only continue with this support and solidarity, despite attempts to intimidate us. With love and solidarity.”