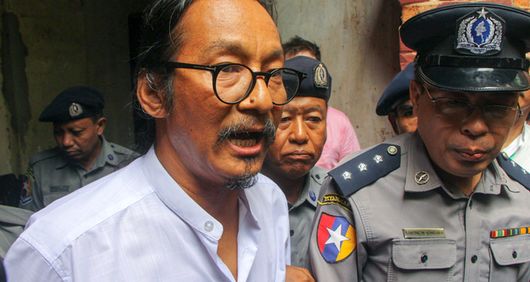 Filmmaker Min Htin Ko Ko Gyi was released from prison on 21 February 2020, after completing his prison sentence. Arrested and convicted for sharing a series of posts on social media criticizing the Myanmar military, he had been detained since April 2019. Considered a prisoner of conscience, Min Htin Ko Ko Gyi should never have been arrested or imprisoned in the first place.

On 21 February 2020, Min Htin Ko Ko Gyi was released from Insein prison in Yangon, Myanmar’s largest city, after having completed his prison sentence. Arrested on 12 April 2019 for social media posts critical of the military-drafted 2008 Constitution and the military’s role in politics, he was sentenced to one year’s imprisonment on 29 August 2019 under Section 505(a) of Myanmar’s Penal Code.

He was released after just over ten months behind bars, after receiving routine sentence reductions. During trial he was denied bail on several occasions, despite major health concerns.

While we celebrate that Min Htin Ko Ko Gyi is free, the fact remains he should have never been arrested or imprisoned in the first place. His conviction should be quashed.

Amnesty International remains deeply concerned about the ongoing prosecution and imprisonment of activists and human rights defenders in Myanmar. We will continue to campaign for the release of all prisoners of conscience in Myanmar, and all those detained solely for the peaceful exercise of the right to freedom of expression.