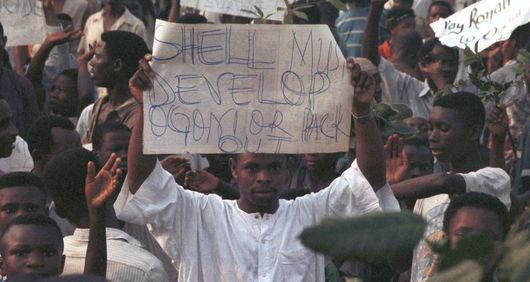 Nigerian authorities have continued to detain human rights defenders Omoyele Sowore and Olawale Bakare at the Department of State Services in Abuja, and Agba Jalingo in Calabar prison, southern Nigeria, since their arrests in August. They are facing trumped-up charges of treason, because they demanded government accountability. The maximum penalty for the offence of treason is the death penalty. They must be released immediately and unconditionally.

Who are the Nigerian human rights defenders facing treason?

Omoyele Sowore is a human rights activist and publisher for the online news agency, Sahara Reporters. On 3 August 2019, armed officials from Nigeria’s Department of Security Services arrested Sowore. At the time of his arrest, he was planning a protest, tagged #RevolutionNow, demanding good governance in Nigeria. Sowore’s protest is considered to be an act of treason, and a call for an undemocratic overthrow of the government.

On 30 September 2019, Sowore was arraigned in court alongside Olawale Bakare, a 21-year-old student arrested during a #RevolutionNow protest in Osun state, in south-western Nigeria, on 5 August 2019. Nigerian authorities have continued to disregard a court order for the release of Sowore and Bakare, even after their bail conditions were fulfilled. Sowore and Bakare are currently being detained by Nigerian authorities in the department of State Security Service.

Agba Jalingo is a journalist for the CrossRiverWatch news website. Jalingo was arrested on 22 August 2019 for publishing an article demanding the Cross River State government be held accountable for spending 500 million naira (approximately 1,071,240 GBP) to float the Cross River Microfinance Bank.

Jalingo spent 33 days in police custody without trial or access to his lawyer or family. He was charged with committing acts of treason, treasonable felony, publishing false information, and instigating terrorism. He is currently undergoing a secret trial and remains detained in Calabar Prison.

On 23 October, the Federal High court granted leave for the prosecution to allow witnesses and ordered Jalingo’s trial to proceed in secret. This implies that the public will not be allowed to observe the process, which raises questions around the transparency and fairness of the process.

In Nigeria, civic space continues to shrink as Nigerian authorities increasingly clampdown on the rights to freedom of expression and peaceful assembly. Authorities have intimidated journalists, bloggers and human rights defenders; harassing them through verbal and physical assault, arbitrary arrest, detention, and prosecuting them through trumped-up charges and misuse of the Cybercrime and Terrorism laws.