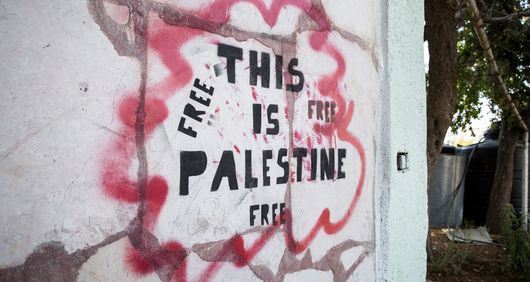 On 24 October 2019, Palestinian photojournalist Mustafa al-Kharouf was released after spending nine months in an Israeli prison. He still does not have legal status and is at risk of being separated from his family again. A new preliminary request to give him legal status has been submitted. Israeli authorities must grant him permanent residency status in East Jerusalem.

Mustafa al-Kharouf is a 32-year-old Palestinian-Jerusalemite photojournalist who has been fighting for his right to legal status in East Jerusalem since his family moved there when he was 12-years-old. Mustafa has been rendered stateless by the conditions of attaining legal status and was recently deported by the Israeli authorities to Jordan, where he has never resided, in violation of international law.

Born in Algeria to an Algerian mother and a Palestinian-Jerusalemite father, Mustafa moved to his home in East Jerusalem with both his parents and siblings 20 years ago. He currently resides in occupied East Jerusalem with his wife and 18-month-old daughter.

Mustafa was arbitrarily detained at Givon Prison in Ramle, in central Israel, on 22 January 2019, pending his deportation.

During the night of 21-22 July 2019, Israeli immigration authorities took Mustafa from Givon Prison and attempted to deport him to Jordan, where Jordanian authorities refused him entry. They then attempted to deport him via a different border crossing between Jordan and Israel, where Jordanian authorities again refused him entry. This deportation attempt lasted over half of a day, during which his whereabouts were unknown to neither his family nor his lawyer. Mustafa al-Kharouf’s lawyer was later informed that Mustafa was being taken back to Givon Prison to be held in custody “pending deportation”.

The difficulties of getting legal status in Israel

On 25 September 2019, a tribunal ruled that he must be released if he is not deported within a month. On 24 October he was released from detention after spending nine months in prison. Under the terms of his release, he has just 21 days to obtain legal status to reside in East Jerusalem or else he must leave the country. Mustafa al-Kharouf’s attorney will petition the court to extend this period. Conditions of his release include 12,000 NIS (approximately 2660 GBP) bail, and he must also remain at home between the hours of 10 pm and 5 am.

Mustafa’s family properly filed their requests for legal status to reside in the city with Israeli authorities soon after their arrival 20 years ago. However, they were subjected to the “centre of life” condition, which Israeli authorities have applied against Palestinian-Jerusalemites in a discriminatory manner since 1998.

Under this condition, the must prove that they maintain their “centre for life” in the city, in order to maintain legal status.

Mustafa’s family had to wait six years before meeting that condition. By the time they met the condition, Mustafa had turned 18, leaving his family unable to apply for child registration or family unification on his behalf. Because he aged into adulthood while waiting to meet Israel’s “centre of life” condition, Mustafa has been rendered stateless.

Since then, he has entered a long legal battle with the Israeli Ministry of Interior Affairs trying to validate his legal status in East Jerusalem without positive results.

Under international law, East Jerusalem is considered part of Occupied Palestinian Territories (OPT), making its Palestinian population a protected group under the Fourth Geneva Convention. Under the Rome Statue of the International Criminal Court “the deportation or transfer [by the Occupying Power] of all or parts of the population of the occupied territory within or outside this territory” constitutes a war crime.