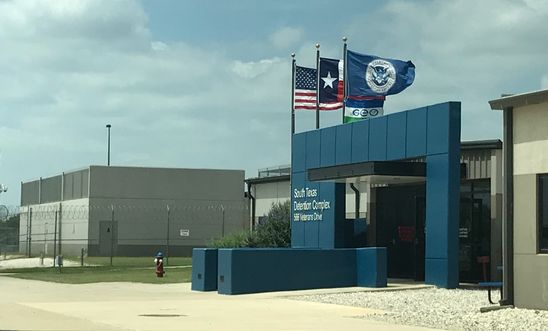 Families detained in unsanitary conditions fear for their safety

‘Detaining anyone solely for migration-related reasons during a global pandemic is cruel, reckless and deadly’ - Erika Guevara-Rosas

The Trump administration is endangering the lives of people in immigration detention during the coronavirus health emergency, Amnesty International said today in a new report.

Detainees at several US Immigration and Customs Enforcement (ICE) detention facilities have launched hunger strikes to demand their freedom, and to protest against dangerous and inadequate hygiene and sanitation conditions.

Amnesty’s report shows how ICE’s unnecessary and punitive detention of people based solely on their migration status constitutes ill-treatment and is a discriminatory denial of the right to health.

The USA has the largest immigration detention system in the world, with nearly 40,000 migrants and people seeking asylum held in more than 200 separate facilities. During the pandemic, ICE has failed to adopt even the most minimum necessary measures to protect public health both in and around its extensive network of facilities.

ICE has also concealed and understated the number of detainees who may have been exposed to or contracted coronavirus, hiding vital information about potential outbreaks from the people detained, their lawyers and loved ones, and the public. Amnesty has received multiple reports of suspected COVID-19 cases in numerous ICE facilities, where lawyers said officials refuse to comment on the health situation. Lawyers also report they lack information about risks in ICE facilities, and that those being monitored for the disease are often left untested.

Amnesty is calling on ICE to urgently provide alternatives to detention, and grant humanitarian parole to immigration detainees except in the most extraordinary of circumstances. ICE should prioritise those who are older, have underlying medical condition or are otherwise at higher-risk if they contract coronavirus.

“ICE’s unnecessary detention of tens of thousands of people poses a massive threat to public health.

“Detaining anyone solely for migration-related reasons during a global pandemic is cruel, reckless and deadly.

“ICE must urgently provide alternatives to detention and grant humanitarian parole to immigration detainees except in the most extraordinary of circumstances.”

Those living with underlying illnesses - including people who are immunocompromised due to HIV - have shared through their lawyers disturbing accounts of substandard health care and inadequate conditions in immigration detention facilities. Those dangerous conditions put them at heightened risk to contract and become severely ill or die from COVID-19, including medical personnel failing to provide antiretroviral drugs to treat HIV, as well as denial of requests for hand sanitiser and face masks.

As the pandemic spread across the USA since January, ICE continued to detain families - in some cases families who were already symptomatic of illness - according to lawyers. At the Dilley facility in Texas, staff from ICE and the private company GEO Group failed to provide those detained with hand sanitiser, or protective equipment or cleaning supplies. Facility staff did not make testing for COVID-19 available and had no plans to do so.

A pregnant mother from Honduras who is seeking asylum with her four-year-old daughter, described her fear of contracting COVID-19 due to the inadequate conditions and care at the Dilley facility:

“I cannot keep a sufficient distance from other people to keep myself safe from contracting the virus if they have it. I must be close to others all of the time. I share a room, bathroom, and the dining hall. All locations in this jail are communal.”

Staff at ICE’s Karnes facility in Texas have also lacked access to COVID-19 tests and have not followed US public health standards for preventing the spread of the virus. Nearly all families reported poor healthcare provisions, which was not even adequate for treating headaches and the common cold. Parents and children in the facility were sick with cold-like symptoms - such as coughs, congestion and fever - and numerous staff exhibited similar cold-like symptoms. Staff did not consistently wear masks or practise social distancing.

Last month, Amnesty and partner organisations called on the 11 US governors whose states host the majority of immigration detainees to use their public health and licensing authority to instruct federal immigration detention facilities and county and local detention centres to substantially reduce their detainee occupancy capacity. Similarly, the four lead UN agencies on human rights, global health, migrants and refugees, issued a joint statement calling for the immediate release of migrants and asylum-seekers being held in cramped and unsanitary detention conditions. The agencies also called for the immediate release of all children and their families, as well as those detained without sufficient legal basis.

Downloads
‘We are adrift, about to sink’: the looming COVID-19 disaster in US immigration detention facilities