UK: new trade deal with Israel must not be a betrayal of Palestinians' human rights 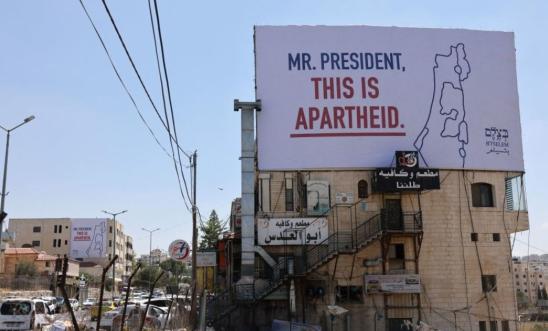 Amnesty International has said that a new UK trade deal with Israel “must not be a betrayal of Palestinians’ human rights”, as negotiations on the deal are set to begin later today.

International Trade Secretary Anne-Marie Trevelyan is due to meet the Israeli Ambassador to the UK Tzipi Hotovely in London this afternoon to begin talks on the issue.

The UK has recently conducted a consultation over plans to negotiate a new UK-Israel Free Trade Agreement this year which will “upgrade” an existing Trade and Partnership Deal with Israel.

Amnesty is warning that a poorly-drafted deal could allow the Israeli authorities to consolidate unfounded claims to occupied Palestinian land, expand illegal settlements, and perpetuate the system of apartheid associated with this.

“A new trade deal with Israel must not be a betrayal of Palestinians’ human rights and must uphold the UK’s obligations under international law.

“In their haste to agree a shiny new trade deal with Israel, there’s a distinct danger that UK negotiators will fail to ensure absolute clarity over the precise origins of goods destined for the UK market.

“Unfortunately, the faulty EU-Israel trade arrangement is currently allowing Israeli exporters to pass off settlement goods as Israeli ones - a UK Free Trade Agreement needs to be distinctly better than this.

“The bottom line here is that UK-Israel trade should not incentivise Israel’s system of apartheid against the Palestinians.”

Amnesty has sent a 19-page briefing to the Department of Trade setting out how the agreement should be framed to ensure it doesn’t reinforce Israel’s breaches of international law and is consistent with the UK’s current non-recognition of Israeli settlements in the Occupied Palestinian Territories. Such differentiation within a trade agreement, requires robust monitoring and enforcement of WTO rules of origin concerning the sourcing of goods, warned Amnesty.

In line with international law, the UK government currently does not recognise as a legitimate part of Israel the territories that Israel has militarily occupied since June 1967 - a stance that is supported by the overwhelming majority of the international community and is reflected in numerous UN resolutions.

However, Amnesty is concerned that a lack of clarity in the terms of a new trade deal could nevertheless see the UK treating goods and services sourced from Israeli settlements built on stolen Palestinian land as legitimate items of trade, thus tacitly supporting Israel’s wider occupation, settlement and annexation project.

A major source of concern, explains Amnesty’s briefing, is that the new trade deal is likely to closely follow the terms of an existing EU-Israel Association Agreement which has proved unable to fully demarcate goods according to place of origin - allowing Israel to pass off items produced within its illegal settlements on occupied Palestinian land as coming from Israel.

The current technical arrangement to exclude products originating in Israeli settlements from preferential market access essentially depends on importers’ own checking of the postcodes listed on Israeli proofs of origin, and on those importers not claiming preferences when postcodes indicate that the goods in question originate in the settlements. This has created an enforcement gap because customs authorities remain largely unaware of the volumes and characteristics of the goods originating in the settlements that have escaped their inspection, and for which preferential treatment has been claimed and granted.

As part of the Free Trade Agreement negotiation, Amnesty is calling on the UK to ensure that there is:

-    A clear, explicit and unambiguous statement emphasising the UK’s non-recognition of the Occupied Palestinian Territories as being part of the State of Israel

-    A mutually-agreed arrangement whereby so-called “preferential rules of origin” clearly prevent products and services originating from Israeli settlements in the Occupied Palestinian Territories from being designated as originating in Israel.

Amnesty is emphasising that a renegotiated trade agreement needs to ensure that the UK can readily differentiate between goods originating in Israel and goods originating in the Occupied Palestinian Territories for the purpose of determining tariff and quota treatment. In addition, the UK must ban the import of all goods produced in Israel’s illegal settlements and help put an end to the multimillion-pound profits that have incentivised mass human rights violations against Palestinians.

While Israel settlement goods must not be designated as “Israeli”, said Amnesty, it is also important that Palestinian products are in no way prejudiced by the Israel trade agreement.

Earlier this year, Amnesty published a major report showing how the Israeli authorities enforce a system of oppression and domination against the Palestinian people amounting to the crime of apartheid. This system relies on large-scale seizures of Palestinian land and property, a long history of unlawful killings, the forcible transfer of Palestinian people from their land, and the denial of nationality and citizenship to Palestinians.

In November, Amnesty also documented dozens of incidents where machinery belonging to the UK construction equipment giant JCB had been used to demolish residential and farm buildings belonging to Palestinians. Amnesty has called on the firm to take measures to prevent its diggers from being used for the unlawful destruction of Palestinian homes or the construction of Israel’s network of illegal settlements in occupied Palestinian territory.

In 2017, to mark the 50th anniversary of Israel’s occupation of the West Bank, including East Jerusalem and the Gaza Strip, Amnesty launched a campaign calling on all countries to prohibit goods from Israel’s network of illegal settlements built on Palestinian land from entering their markets and to prevent their companies from operating in the settlements or trading in settlement goods.