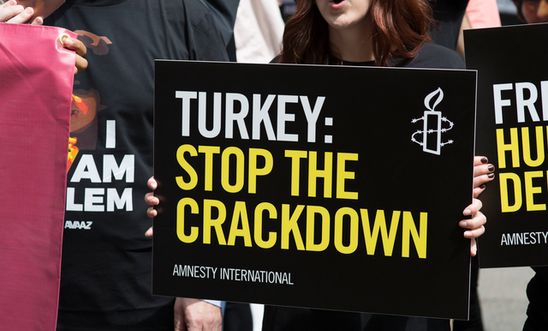 At least 100 journalists are currently behind bars in Turkey, the highest number of any country in the world

“This is a dark day for press freedom and for justice in Turkey and sets a chilling precedent for scores of other journalists facing trials on similar trumped-up terrorism charges.

“The cruelty of these politically-motivated sentences - 30 years in jail with up to 23 hours per day in solitary confinement and no possibility of parole - are clearly intended to instil fear.

“Imposing such a sentence would not only flout freedom of expression, it would violate the prohibition of torture and other ill-treatment.

“News of these sentences drained the joy from celebrations for the release of another journalist, Deniz Yücel. He had been in prison for more than a year, without an indictment, much of it in solitary confinement.”

Prolonged solitary confinement - 22 hours a day or more without meaningful human contact for over 15 days - is a direct contravention of the UN Standard Minimum Rules for the Treatment of Prisoners (the Nelson Mandela Rules). It constitutes cruel, inhuman or degrading punishment and could amount to torture, certainly if applied for months or years.

Post-coup crackdown, including on Amnesty staff

Those caught up in the crackdown include Amnesty’s Turkey chair, Taner Kılıç, and İdil Eser, the organisation’s Turkey director, as well as nine other human rights activists accused of “membership of a terrorist organisation”. Mr Kılıç was detained last June and has been in custody ever since, while Ms Eser was arrested a month later but released on bail - along with several others - at her first court hearing in October. If convicted, the 11 accused could face jail terms of up to 15 years. Amnesty has denounced the proceedings as “politically-motivated”.