Turkey: 'politically-motivated' trial of Amnesty director and ten other activists to begin 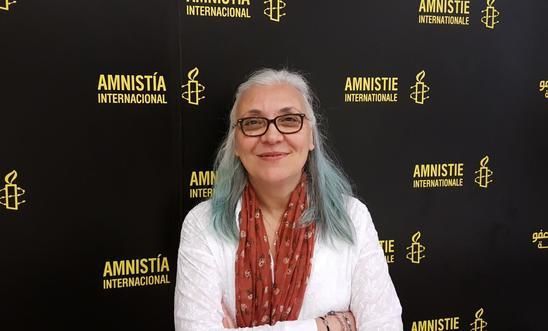 Trumped-up terrorism charges against 11 human rights activists, including Amnesty International’s Turkey director and chair, do not stand up to the slightest scrutiny, said Amnesty as court proceedings begin today in Istanbul.

Amnesty is insisting that all charges against the 11 - carrying jail terms of up to 15 years and set out in two indictments to be heard in two separate trials - are entirely baseless and that the case against them should be dropped.

Ten activists, including İdil Eser, the Director of Amnesty Turkey, were arrested on 5 July, whilst Amnesty’s Turkey Chair, Taner Kılıç, was arrested a month earlier. They are accused of “membership of a terrorist organisation”.

The charges against the 11 include outlandish claims that ordinary human rights activities amount to assisting terrorist groups. These include appealing to stop the sale of tear gas, making a grant application, and campaigning for the release of hunger-striking teachers. According to the indictment, Eser is said to be linked to three unrelated and opposing terrorist organisations, and some of the allegations against her refer to two Amnesty documents which were issued before she even joined Amnesty.

The prosecution has offered no evidence to support their allegations that the Büyükada workshop, where the arrests took place, was a “secret meeting to organise a Gezi-type uprising” or that any of the defendants were engaged in wrongdoing. Amnesty has made a detailed analysis of the indictment, addressing each of the allegations made against the 11 defendants, plus another relating to the case against Taner Kılıç.

“From the moment of their detentions, it has been clear that these are politically-motivated prosecutions aimed at silencing critical voices within Turkey.

“Without substance or foundation, the Turkish authorities have tried and failed to build a case against İdil, Taner and the other nine human rights activists. It took the prosecutor more than three months to come up with nothing. It should not take the judge more than half an hour to dismiss the case against them.

“These two trials will be an acid test for the Turkish justice system and will demonstrate whether standing up for human rights has now become a crime in Turkey. With the eyes of the world on these courtrooms in Istanbul and Izmir, the time has come for the long overdue unconditional release of our colleagues.”

As well as the hearing against the 11 which begins in Istanbul today, Taner Kılıç will also appear at a hearing in Izmir tomorrow on a separate charge of “membership of the Fethullah Gülen Terrorist Organisation”. This related to an allegation that Kılıç downloaded and used the ByLock messaging application, claimed to have been used by the Gülen movement to communicate. However, two independent forensic analyses of Kılıç’s phone commissioned by Amnesty found that there is no trace of Bylock ever having been on his phone.

The trials come as international pressure mounts on Turkey to release the activists. Last week, the secretary-general of the Council of Europe, Thorbjørn Jagland, the president of the European Parliament, Antonio Tajani, and the Chair of the Human Rights Committee in the European Parliament, Pier Antonio Panzeri, all called for their release. They join a long list of governments, institutions and political figures demanded their release, including the European Commission, the US State Department, UN officials, and the German, Austrian, Irish and Belgian governments. Meanwhile, various high-profile actors have also called for their release, while most recently the US whistleblower Edward Snowden recorded a video message of support.

Since a failed coup in mid-2016, the Turkish authorities have undertaken a wide-ranging crackdown on civil society institutions. Criminal investigations have been opened against 150,000 people accused of being part of the “Fethullah Terrorist Organisation,” which the government claims masterminded the coup. Some 50,000 people are currently jailed, including at least 130 journalists, the highest number of any country in the world. More than 100,000 public sector workers, including a quarter of the judiciary and hundreds of academics, have been arbitrarily dismissed.

Vigil at Turkey Embassy in London

Amnesty activists will stage a solidarity vigil at the Turkey Embassy in central London (43 Belgrave Square, London SW1X 8PA) at 9am on Wednesday 25 October.