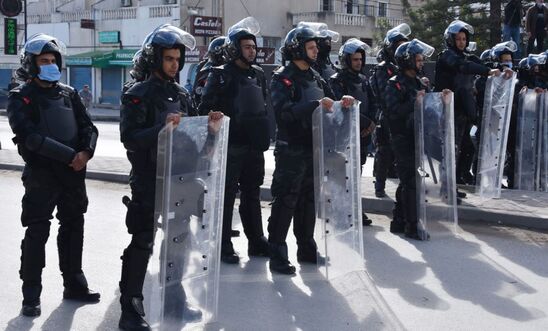 Those subjected to bans include judges, civil servants, businessmen and an MP

In the first month since his assumption of exceptional powers, Tunisian president Kais Saied has overseen the widespread use of “unlawful and arbitrary” travel bans.

Amnesty International has documented the cases of at least 50 people - including judges, senior state officials and civil servants, businessmen and a parliamentarian - who have been barred from travelling abroad over the past month (see cases below).

The bans have been imposed without judicial authorisation or written explanation, and no timeframes have been specified.

The total number of people facing travel bans since 25 July is likely to be far greater than the 50 so far identified, warned Amnesty.

In a speech at Tunis airport on 16 August, President Saied referred to recent criticism of the travel bans claiming he did not wish to undermine the right to freedom of movement. He justified the restrictions on the grounds that they formed part of efforts to prevent people suspected of corruption or of posing a security threat from leaving the country.

Tunisian Law no. 75-40 (1975), which regulates the issuance of travel documents, stipulates that the judicial authorities are the sole entity authorised to issue a travel ban.

Amnesty is urging President Saied and the relevant authorities to end the use of arbitrary travel bans and respect freedom of movement. Any restrictions on the right of free movement must be necessary and proportionate, and subject to meaningful judicial review.

“The Tunisian authorities have imposed unlawful and arbitrary travel bans against people in recent weeks without justification and in the absence of any judicial order, in a blatant violation of their right to freedom of movement.

“Even under exceptional circumstances a person should be able to see and challenge the evidence on which a travel ban is based.

“President Kais Saied’s indefinite suspension of parliament cannot be a justification for violating rights and freedoms in the country or undermining the judiciary.”

•    Zied Ajra, an architect and company director, was barred from travelling to Turkey for a holiday on 10 August. He told Amnesty he was forced to wait for 45 minutes as security officials made phone calls before verbally informing him he was barred from travelling because of “instructions from senior officials”. When he asked why, they said, “we don’t have any information”.

•    Skander Rekik, a businessman and political activist, was stopped at the airport while travelling to Turkey on 9 August and questioned by police about his business and his political activities. He was forced to wait two hours before being told he was banned from travelling on orders from “high officials at the presidential palace”. Rekik requested a written document, but was told he could not be given anything. He told Amnesty that since 25 July he had expressed views critical of the president’s exceptional measures on Facebook, including calling the decision to suspend parliament a “coup”.

•    Imen Labidi, a judge in Grombalia, a city south of Tunis, was traveling to Turkey for a holiday on 6 August. She was forced to wait for two hours before being told she was barred from travelling due to an “information notice” from the Interior Ministry about her. She is aware of at least two other colleagues also banned from travelling.

•    Anouar Benchahed, a member of the parliament from the Democratic Current party, was banned from leaving for France on 15 August. He told Amnesty that police officers took his passport and kept him waiting for an hour before telling him a travel ban was imposed on him, providing no further explanation.

•    On 19 August, 23 senior civil servants and 21 members of their families, all of whom who were going to Turkey for a group holiday, were barred from travelling. The group were all members of an association which had condemned travel bans in a statement on its Facebook account. One group member, who asked not to be named, told Amnesty that border police left 30 of them, including children, waiting for five hours in a waiting room at Tunis airport, without food or water. They were not given a written explanation for the travel bans. Border officials forced 14 other members of the group who had already boarded the plane to get off.

On 25 July, after a day of protests, President Saied announced plans to temporarily suspend parliament for 30 days, invoking Article 80 of the constitution which he has interpreted as granting him the right to take exceptional measures in the case of an “imminent threat against the country’s security and independence”. On 23 August, the president announced an extension to parliament’s suspension and the lifting of immunity for its members “until further notice”.