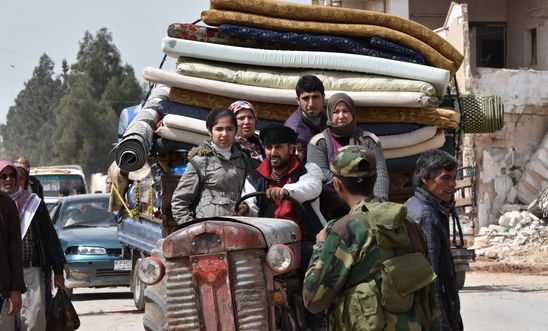 Afrin residents detained and tortured, with houses and businesses looted and confiscated, and schools destroyed or taken over

‘Turkey is the occupying power in Afrin, and is responsible for the welfare of the civilian population’ - Lynn Maalouf

Violations include arbitrary detentions, enforced disappearances and confiscation of property and looting to which Turkey’s armed forces have turned a blind eye. Some of these groups, and Turkish armed forces themselves, have also taken over schools, disrupting the education of thousands of children.

In January, Turkey and allied Syrian armed groups launched a military offensive in Syria against the People’s Protection Units (YPG), the military force of the autonomous administration led by the Syrian Kurd Democratic Union Party (PYD). Three months later, Turkey and its allied forces seized control of Afrin and its surrounding areas, forcibly displacing thousands of people who fled and sought safety in the nearby al-Shahba region where they are now living in dire conditions.

According to several Afrin residents, Turkey’s armed forces have a significant presence in the centre of the city, and in several surrounding villages. On 1 July, Turkey’s Ministry of Foreign Affairs said that its armed forces will stay in Afrin to continue working on the development of the area.

Between May and July, Amnesty interviewed 32 people, some of whom were still living in Afrin and others who had fled to other countries or different areas of Syria. Interviewees named pro-Turkey armed groups - including Ferqa 55, Jabha al-Shamiye, Faylaq al-Sham, Sultan Mourad, and Ahrar al-Sharqiye - as responsible for serious human rights violations.

“We heard appalling stories of people being detained, tortured or forcibly disappeared by Syrian armed groups, who continue to wreak havoc on civilians, unchecked by Turkish forces.

“Turkey is the occupying power in Afrin, and is therefore responsible for the welfare of the civilian population and maintaining law and order. So far, its armed forces have failed utterly in these duties.

“The Syrian government and YPG are exacerbating the suffering of people who have been displaced from Afrin, by trapping them in the al-Shahba region for no apparent reason and depriving them of adequate access to education, food and medical care.

“We are calling on Syria and the YPG to respect the freedom of movement of civilians, and to facilitate the safe and voluntary return of the displaced.”

Amnesty interviewed several residents and internally displaced people who reported that armed groups had arbitrarily detained civilians for ransom, as punishment for asking to reclaim their property, or on baseless accusations of affiliation to the PYD or YPG. Local sources told Amnesty of at least 86 instances of arbitrary detention, torture and enforced disappearance.

A woman displaced from Afrin told Amnesty that her uncle had been taken away by members of a pro-Turkey armed group after he’d returned to his village three months earlier. She said:

“We don’t know where he is. He was head of the local committee. He is not affiliated with the PYD or YPG. He went back to Afrin because he was afraid he would lose his house. He stayed with his wife in another house because our village became a military base for the Turkish forces. One night he decided to ask the armed groups to take him to check on his home. The armed group escorted him to his house, but he hasn’t returned since then. They wouldn’t tell his wife where they took him.”

Two former detainees Amnesty interviewed said they had been held by Sultan Mourad and accused of being affiliated with the YPG. They told Amnesty they’d seen journalists, teachers, engineers, activists, as well as former employees of the PYD and YPG fighters in the prison in Azaz where they were held. One said:

“I was taken to the al-Ra’i prison in Azaz operated by Soultan Mourad. I wasn’t tortured, but I saw men being beaten in front of me by members of Sultan Mourad just for fun, and at night the sound of men screaming echoed through the building. I was released without seeing a judge. I thought I would never make it out of there.”

Since March, when Turkey and allied armed groups seized control of Afrin, hundreds of people have been returning to the city by foot through a mountainous route, as the YPG has blocked the official routes into the city, deliberately preventing displaced people from returning to Afrin. Many of those who managed to return found that their properties had been confiscated and their possessions stolen by armed groups allied with Turkey.

Ten people told Amnesty that Syrian armed groups had confiscated properties and shops in Afrin. Displaced residents said they were informed by their relatives and neighbours that their homes were either being used by the pro-Turkey armed groups as military headquarters, or occupied by displaced families from Eastern Ghouta and Homs.

One teacher displaced in a camp in the al-Shahba region told Amnesty that his house in Jenderes had been confiscated by Faylaq al-Sham. He said:

“My neighbour told me that my home was confiscated. He sent me images that clearly show the name of Faylaq al-Sham written on the wall of the entrance door.”

Amnesty also interviewed three displaced residents who reported that armed groups had confiscated their shops. A man and his son, a graphic designer, who owned three shops in Afrin, said a relative had told them their home had been confiscated by the Ferga 55 armed group. They also received photos showing one of their shops converted into a butcher shop by a family from Eastern Ghouta. An owner of a supermarket in a village near Afrin told Amnesty that a relative had told him recently that his supermarket was first looted, and was now being run by family from Eastern Ghouta.

“The families from Ghouta are not to be blamed. They have been displaced like us, and are maybe in an even worse situation than us.”

Looting of homes and businesses

Twelve people told Amnesty they’d witnessed or been victims of looting. Several displaced people were told by their relatives that their home had either been completely looted or were missing expensive appliances such as their TV sets, computers, washing machines or refrigerators.

In April, a representative of the military court claimed in a media interview that there had been looting incidents during the military operation, by both armed members and civilians, but that the court had begun to return the belongings to their owners. The court representative explained that, in coordination with the military police in Azaz and Turkey’s armed forces, the individuals responsible for the looting had been arrested and referred to court. But one person who returned to Afrin in May told Amnesty:

“I went to my parents’ home and it was empty. They stole every piece of furniture, appliances, and everything else. The neighbours saw the Free Syrian Army packing all the furniture in trucks. There are at least four armed groups in control of the village, so they don’t know which one was responsible.”

A resident from Afrin who sought refuge in Germany, told Amnesty:

“I have five apartments in Afrin city and a commercial shop. My friend told me that two of my homes are now occupied by displaced families. I managed to get the phone number of two families, one from Harasta and another from Eastern Ghouta. I called them to ask them to take care of the house but they told me that the house was already looted when they moved in. I had just renovated the house. My problem is not with the families living in the house, but with the armed groups.”

Schools taken over by armed groups

Since January, access to education has been nearly impossible for people in Afrin. Residents told Amnesty that since March, children had been able to access only one school in Afrin city, while Afrin University has been completely shut down after it was destroyed and looted. According to former teachers displaced to the al-Shahba region, Turkish forces, alongside allied Syrian armed groups, are using Amir Ghabari School in Afrin as a military headquarters. Amnesty reviewed satellite imagery from April showing several armoured vehicles and a recently built-up structure. These vehicles and structure were not present before Turkish forces and armed groups gained control of Afrin in March.

Violations by the Syrian government and YPG

Following the offensive in January, thousands of people fled to the nearby al-Shahba region. At least 140,000 people are now living in camps or damaged houses without proper access to services, especially medical care. The injured and chronically ill have to wait for government permission to be allowed access into Aleppo city, the nearest place where they can receive adequate medical care.

The Syrian government has also prevented any movement from the al-Shahba region to other parts of Syria with better living conditions. This has forced many people struggling to survive to pay large amounts of money to smugglers to counter these movement restrictions. In addition, the YPG has blocked the roads from the al-Shahba region to Afrin, deliberately preventing displaced people from returning to their homes. Since the end of the military operation in March, hundreds have returned to Afrin after walking through a long and arduous mountain route.

A woman who returned to Afrin in early April told Amnesty:

“My aunt, who is 60 years old and suffered from a severe type of diabetes and other health conditions, died on the way back to Afrin from severe dehydration. The YPG didn’t let us take our cars through the official road so we walked for around five hours. She ran out of water halfway through. Her daughter went to find a spring to get her water but she didn’t make it back in time.”

According to several people, including members of the Kurdish Red Crescent, the Syrian government has restricted the medical evacuation of sick and wounded civilians from the al-Shahba region to Aleppo. The Kurdish Red Crescent and medical staff told Amnesty that there is only one hospital and two clinics providing basic medical care and medicine in the al-Shahba region. They said that they lack both the medical expertise and equipment to perform surgeries or treat chronic diseases.

At the time of writing, around 300 people suffering from chronic diseases and serious injuries had been waiting for their medical evacuation to be approved by the Syrian government. Since mid-March, only 50 people have been allowed to travel to the national hospital in Aleppo for treatment.