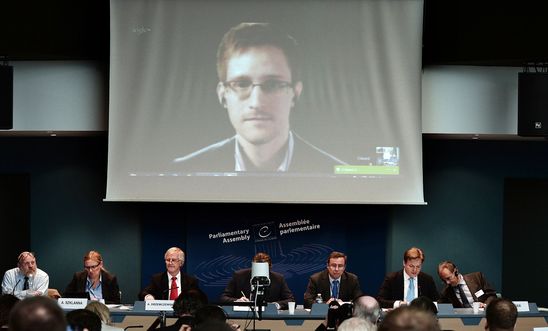 Edward Snowden made the allegations in a video conference to PACE today. © FREDERICK FLORIN/AFP/Getty Images

Former US intelligence contractor and whistleblower Edward Snowden’s latest allegations point to a very real risk that human rights workers - including Amnesty International staff - have been the targets of mass surveillance by the USA’s and the UK’s spy agencies.

Snowden, who is living in exile in Moscow, made the remarks this afternoon via videoconference to the Parliamentary Assembly of the Council of Europe in Strasbourg in France.

When asked if the US National Security Agency or its UK counterpart GCHQ were actively spying on human rights organisations such as Amnesty International, Human Rights Watch and others, he said:

“Without question, yes, absolutely …The NSA has in fact specifically targeted the communications of either leaders or staff members in a number of purely civil or human rights organisations of the kind described”.

Last December Amnesty issued a claim against the UK government over concerns that the organisation’s communications had been unlawfully accessed by the UK intelligence services. The claim was made to the Investigatory Powers Tribunal arguing that the activities of the UK authorities are in breach of Article 8 (right to privacy) and Article 10 (right to freedom of expression) of the Human Rights Act 1998. The IPT, which exists to review complaints about the conduct of the UK’s intelligence agencies, has also been criticised by Amnesty on the basis of its own secrecy.

“These allegations, if substantiated, would confirm our long-held fears that state intelligence agencies like the NSA and GCHQ have been subjecting human rights organisations to mass surveillance all along.

“This raises the very real possibility that our communications with confidential sources have been intercepted. Sharing this information with other governments could put human rights defenders the world over in imminent danger.

“When these concerns were raised before the US Supreme Court, they were dismissed as being ‘speculative’. Snowden’s latest revelation shows that these concerns are far from theoretical - they are a very real possibility.

“We now need a full and frank disclosure of the extent of these surveillance programmes as well as water-tight legal guarantees against such indiscriminate surveillance in the future.”

The NSA’s sweeping collection of phone “metadata” was made possible by amendments in 2008 to the US Foreign Intelligence Surveillance Act, which exempt such surveillance from any meaningful oversight. Under the amendments, the US government has no obligation to reveal whose communications it intends to monitor, and a secretive FISA court has no role in reviewing how the government is actually using the information it gathers.  Most remarkably, even if the court finds the surveillance procedures deficient, the government can disregard those findings and continue its surveillance while it appeals the court’s decision.

The American Civil Liberties Union has challenged the law’s constitutionality on behalf of Amnesty, human rights lawyers, and other organisations. The US Supreme Court dismissed the case in 2012, saying the groups couldn’t show that they were likely to be subject to surveillance - something which is in fact almost impossible to prove, given the very secretive nature of the surveillance and the FISA court which authorises it.

Other US surveillance programmes are believed to capture the content of internet communications, and phone calls are authorised under presidential directives. Some of these intercepted communications are routinely shared with other intelligence agencies, including GCHQ.