Saudi Arabia: why Amnesty will not attend 'sham' C20 meetings 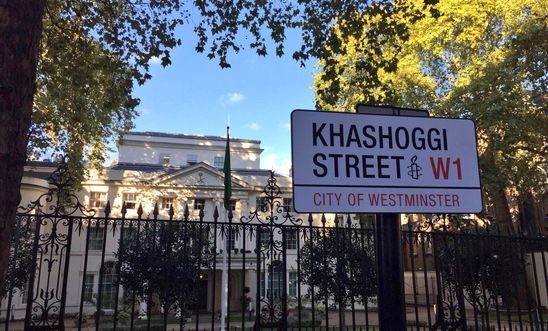 in 2018, Amnesty activists renamed the street outside the Saudi Arabian Embassy in London to highlight the need for justice over Jamal Khashoggi's murder © Amnesty International

Amnesty International has denounced the “C20” civil society meeting taking place in Saudi Arabia this week as a “sham”, saying it would not be participating in the event.

The global C20 civil society forum, a cycle of preparatory meetings leading up to the annual G20 summit, began with a “kick-off” meeting in Riyadh yesterday.

Saudi Arabia took over the G20 presidency last month and will be hosting the G20 summit in Riyadh in November.

In a joint statement with Transparency International and Civicus, Amnesty says that a country that “closes civic space until it is virtually non-existent cannot be trusted to guarantee the basic conditions for international civil society to exchange ideas and collaborate freely on any issue” (see full statement here).

The Saudi-led C20 process has already failed to guarantee the C20’s fundamental principles. The appointment of chairs of working groups and various committees has been secretive and non-consultative, while experienced international groups have been excluded. The C20 process is led by the King Khalid Foundation, which is connected to the Saudi royal family.

“The C20 is supposed to provide a platform for civil society voices from around the world to influence the G20 agenda.

“Since Saudi Arabia has locked up most of its own independent activists, the only domestic organisations present will be aligned with the government - which makes a mockery of the whole process.

“We cannot participate in a process which is being abused by a state which censors all free speech, criminalises activism for women’s and minority rights, as well as homosexuality, and tortures and executes critics.”

Despite expensive public relations campaigns to improve its image - including hosting numerous high-profile sporting events - Saudi Arabia’s human rights record is as appalling as ever.

The Saudi authorities ban political parties, trade unions and independent human rights groups. The country’s leading women’s rights activists remain behind bars and on trial for their promotion of women’s rights. Scores of other individuals, including human rights defenders, are serving lengthy prison terms for their peaceful activism or have been arbitrarily detained for up to a year-and-a-half without charges. The Saudi Arabian authorities have also carried out executions following unfair trials and torture, as well as other ill-treatment in custody.

Saudi Arabia is also responsible for the extrajudicial execution of the journalist and peaceful critic Jamal Khashoggi. Since his murder in October 2018, there has been no justice or accountability for his death.