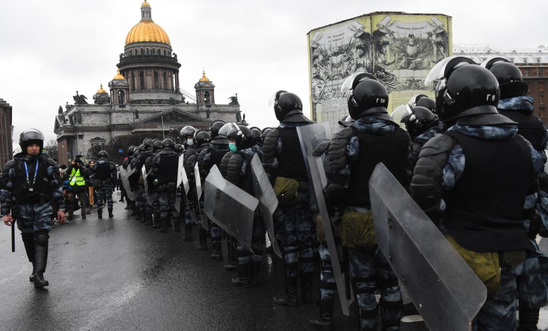 According to police watchdog OVD-Info, at least 1,786 protesters were taken into custody across Russia, with 805 detentions in Saint Petersburg alone. The authorities in Moscow and other cities denied permits for the rallies, claiming they violated COVID-19 restrictions.

Law-enforcement agents also made “preventive” detentions - including of Kira Yarmysh, Navalny’s spokeswoman; Lyubov Sobol, lawyer for Navalny’s Anti-Corruption Foundation; Vladimir Ryzhkov, former State Duma deputy; and Yefim Khazanov, a member of the Russian Academy of Sciences. They have been charged with calling for the participation in an “unauthorised” demonstration, an administrative offence in Russia.

This was the fourth mass protest by Navalny’s supporters after his unlawful arrest and imprisonment earlier this year. During the three previous protests - on 23 and 31 January, and 2 February - more than 11,000 people were arrested, an unprecedented number even in Russia where dissent is systematically silenced. More than 100 criminal cases have been opened against protesters.

Amnesty is reiterating its call for the immediate release of Aleksei Navalny and for the withdrawal of a prosecutorial request to ban his organisations as “extremist”.

“With every peaceful protester they arrest, the Russian authorities plunge the country deeper into a human rights crisis.

“Their attempts to trample dissent into dust are growing increasingly desperate - from the ongoing detention of Navalny and the effort to ban his movement by branding it ‘extremist’, to the violent targeting and mass arrest of his supporters.

“There are simply not enough jail cells to lock up and silence every critical voice in Russia.