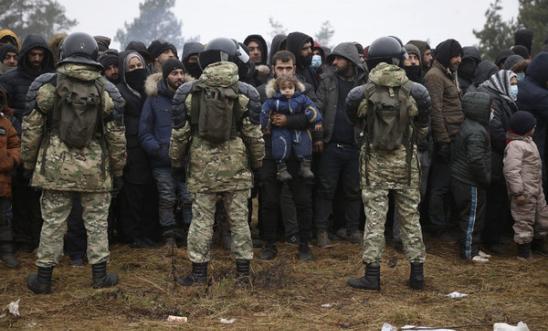 Human rights violations have included racist abuse, strip searches, the use of Tasers, and being placed in deeply unsanitary overcrowded cells

The Polish authorities arbitrarily detained nearly 2,000 people seeking asylum who crossed into the country from Belarus last year, with many subjected to serious abuse - including being strip searched in unsanitary, overcrowded facilities, being forcibly sedated or even having electro-shock Tasers used against them - said Amnesty International in a new report today (11 April).

More people seeking asylum are now trying to enter Poland from Belarus, where they are unable to access crucial funds due to international sanctions, and risk harassment or detention by Belarusian police due to their irregular immigration status. At the Polish border they face razor wire fences and are repeatedly forced to return.

“People seeking asylum who crossed the Belarus border into Poland, including many forced to do so by Belarusian Border Guards, are now detained in filthy, overcrowded detention centres where guards subject them to abusive treatment and deny them contact with the outside world.

“This violent and degrading treatment is in stark contrast to the warm welcome Poland is giving displaced people arriving from Ukraine. The behaviour of the Polish authorities smacks of racism and hypocrisy.

“Poland must urgently extend its admirable compassion for those entering the country from Ukraine to all those crossing its borders seeking safety.”

Polish border guards have systematically rounded up and used violence to force people to return to Belarus, sometimes threatening them with guns.

The vast majority of those who have managed to apply for asylum in Poland, are forced into automatic detention, without a proper assessment of their individual situation and the impact detention would have on their physical and mental health. They are often held for long or indefinite periods of time in overcrowded centres that offer little privacy and only limited access to sanitary facilities, doctors, psychologists or legal assistance.

Almost all of the people Amnesty interviewed said they were traumatised after fleeing areas of conflict and being trapped for months on the Belarusian-Polish border. They also suffered from serious psychological problems, including anxiety, insomnia, depression and frequent suicidal thoughts, undoubtedly exacerbated by their unnecessary detention. For most, psychological support was unavailable.

Retraumatised inside a military base in Poland

Many of the people who Amnesty spoke to had been in Wędrzyn detention centre, which holds up to 600 people. Overcrowding is particularly acute in this facility, where up to 24 men are detained in rooms measuring just eight square metres.

Last year, the Polish authorities decreased the minimum required space for foreign detainees from three square meters per person to just two. The Council of Europe’s minimum standard for personal living space in prisons and detention centres is four square metres per person.

Many were victims of torture in their home countries before enduring harrowing experiences both in Belarus and on the Polish border. The detention centre in Wędrzyn forms part of an active military base. Its barbed wire walls and persistent sound of armoured vehicles, helicopters and gunfire from military exercises in the area only serves to retraumatise them.

“Most days we were woken up by the sounds of tanks and helicopters, followed by gunshots and explosions. This would go on all day, sometimes. When you have nowhere to go, no activities [to] take your mind off it or a space for even a brief respite, this was intolerable. After all the torture in prison in Syria, threats to my family, and then months on the road, I think I was finally broken in Wędrzyn.”

In Lesznowola Detention Centre, detainees said that guards’ treatment left them feeling dehumanised. The staff called detainees by their case numbers instead of using their names and meted out excessive punishments, including isolation, for simple requests, such as asking for a towel or more food.

Nearly all those interviewed reported consistently disrespectful and verbally abusive behaviour, racist remarks and other practices that indicated psychological ill-treatment.

In interviews with Amnesty, the men complained about how body searches were conducted. When people were transferred from one detention centre to another, they were forced to undergo a strip search at each facility, even though they were in state custody at all times. In Wędrzyn, people recounted abusive searches. For example, all newly admitted foreigners were kept together in a room, required to remove all of their clothes and ordered to perform squats longer than necessary for a legitimate check.

Amnesty interviewed several people who were forcibly returned as well as some who avoided return and remain in detention in Poland. Many said the Polish border guards who conducted the returns coerced them into signing documents in Polish that they suspected included incriminating information in order to justify their returns. They also said that, in some cases, border guards used excessive force, such as tasers, restrained people with handcuffs, and even sedated those being returned.

Authorities attempted to forcibly return Yezda, a 30-year old Kurdish woman, with her husband and three small children. After being told that the family would be returned to Iraq, Yezda panicked and screamed and pleaded with the guards not to take them. She threatened to take her life and became extremely agitated. Yezda said:

“I knew I could not go back to Iraq and I was ready to die in Poland. While I was crying like that, two guards restrained me and my husband, tied our hands behind our backs, and a doctor gave us an injection that made us very weak and sleepy. My head was not clear, but I could hear my children, who were in the room with us, crying and screaming.

“We were asked to go through the airport security and the guards told us to behave on the plane. But I refused to go. I remember noticing that I didn’t even have any shoes on, as in the chaos at the camp, they slipped of my feet. My head was not clear, and I couldn’t see my husband or the children, but I remember that they forced me on the plane that was full of people. I was still crying and pleading with the police not to take us.”

Yezda said that she broke her foot as she fought the guards who tried to put her on the plane. She and her family were returned to Warsaw after the airline refused to take them to Iraq. They remain in a camp in Poland for now.

Volunteers and activists have been barred from accessing the border of Poland and Belarus, and some have even faced prosecution for trying to help people cross the border. In March, activists who had helped people both on Poland’s borders with Ukraine and with Belarus were detained for providing life-saving assistance to refugees and migrants on the Belarussian border, and now face potentially serious charges.

Stranded at the border in Belarus

On 20 March, the Belarusian authorities reportedly evicted close to 700 refugees and migrants from a warehouse in the Belarusian village of Bruzgi. Many were families with young children and people suffering from severe illnesses and disabilities.

With no notice they found themselves stranded in the forest, trying to survive in sub-zero temperatures without shelter, food, water or access to medical care. Many remain in the forest and experience daily abuse from the Belarusian border guards, who use dogs and violence to force people to cross the border into Poland.

“Hundreds of people fleeing conflict in the Middle East and other parts of the world remain stranded on the border between Belarus and Poland. The Polish Government must immediately stop forced returns. They are illegal no matter how the government tries to justify them.

“The international community – including the EU – must demand that those trapped on Poland’s border with Belarus are given the same access to EU territory as any other group seeking refuge in Europe.”