Poland: Charges against activist accused of aiding an abortion must be dropped 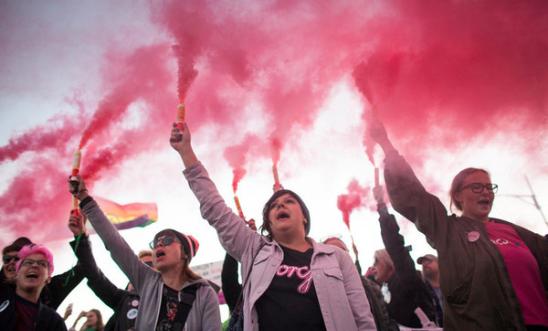 ‘No one should be prosecuted for showing compassion and acting in solidarity. Not me. Not anyone’ – Justyna Wydrzyńska

Charges against Justyna Wydrzyńska, a human rights defender who faces up to three years in prison for supporting a pregnant woman who needed a safe abortion in Poland, should be immediately dropped, Amnesty International said today ahead of her trial in Warsaw tomorrow.

In 2020, Justyna helped a pregnant woman to access abortion pills. The case marks the first in Europe in which an activist is being prosecuted for aiding an abortion by providing pills.

“These charges are a shocking and deliberate attempt to shut down Justyna Wydrzyńska’s legitimate activism, despite the fact that she is simply trying to support the rights of women and all pregnant people to access safe abortions in Poland.

“Amid harmful abortion laws, activists like Justyna are essential to ensure pregnant people in Poland do not have to risk unsafe abortions that put their health and lives at risk.

“The Polish authorities must immediately drop all charges against her and fully decriminalise abortion, including helping others to have an abortion.”

Poland has one of the most restrictive abortion laws in Europe. Abortion is only legal when the health or the life of the pregnant people is at risk or when the pregnancy is the result of rape or incest.

Performing your own abortion or possession of abortion pills for a self-managed abortion is not a crime under Polish law, but any person or doctor who helps pregnant people with an abortion outside the two permitted grounds may face up to three years in prison.

On 1 June last year, police searched Justina’s house and confiscated medicines in the form of pills, a computer, pen drives and mobile phones.

In November, she was charged with “helping with an abortion” and “possession of medicines without authorisation for the purpose of introducing them into the market”.

“In 2020, a woman came to me in a desperate situation. She told me that her violent husband was trying to stop her from having an abortion. Her story touched my heart as it was similar to what I had experienced. I felt I had to help her.

"People who need an abortion in Poland need reliable and unbiased information about safe abortions and they need help and support. No one should be prosecuted for showing compassion and acting in solidarity. Not me. Not anyone.”

Polish abortion laws: Tens of thousands of women in need

Justyna is a doula — a trained companion who supports another person through pregnancy — and one of the four founders of Abortion Dream Team, an activist collective that campaigns against abortion stigma in Poland and offers unbiased advice on how to get a safe abortion following World Health Organisation (WHO) guidelines.

Abortion Dream Team forms part of Abortion Without Borders, a cross European feminist network that provides information, counselling, funding and practical support to people in Poland and other countries who need an abortion abroad or access to reliable online sources of abortion medicines that enable safe self-managed abortions at home.

Between January 2021 and January 2022, Abortion Without Borders  was contacted by more than 32,000 people in Poland — a five-fold increase from the previous year — and supported over 1,500 individuals to travel abroad for an abortion.

In recent months, calls for help have increased as thousands of refugees fleeing Ukraine arrive in Poland in need of sexual and reproductive healthcare.

So far, just under 50,000 people have taken action to call on the Polish Prosecutor General to drop all charges. You can take action here.

Justyna Wydrzyńska’s hearing is scheduled for 9.30am (GMT) on 8 April at Warsaw’s Praga Południe District Court.