Poland: 17 Afghans violently pushed back to Belarus by authorities at border 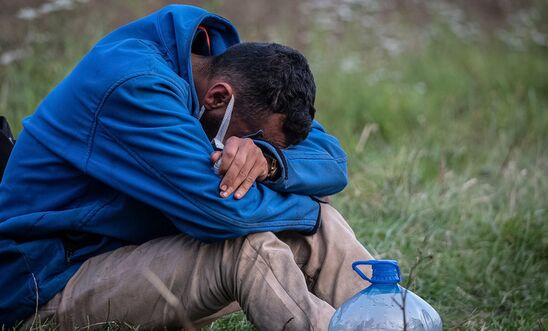 The people, including at least one minor, have been stuck at border since August

Amnesty has verified video shared by the Belarusian authorities, which shows people crossing the border

‘Today’s violence and new pushback... is a slap in the face of international law and the human right to seek asylum’ - Nils Muižnieks

Amnesty International is deeply concerned about reports that 17 out of the 32 Afghans stuck on the Poland-Belarus border since August have been forcibly pushed back to Belarus after attempting to cross the barbed wire fence towards Poland today.

Polish authorities admit that “direct coercion measures” have been used against people from the group who tried to cross the fence.

Amnesty has verified a video shared by the Belarusian authorities, which shows people crossing the border in the Usnarz Górny area. According to the Polish organisation Fundacja Ocalenie, a group of 17 people - including at least one minor - were violently apprehended after crossing the fence towards Poland. They were then detained in a border guard station in Poland and subsequently pushed back to Belarus by the Polish authorities. An Amnesty digital investigation had already shown that the same group had been subjected to a suspected forced return in August.

“This group of Afghan people has been held in abysmal conditions at the Polish-Belarus border for two months now. Today’s violence and new pushback to Belarus is a slap in the face of international law and the human right to seek asylum.

“The move blatantly disregards a European Court of Human Rights ruling instructing Polish authorities to assist the group and banning the authorities from returning the group to Belarus, so long as they are in Poland.

“The Polish government has shown immense cruelty in attempting to legitimise illegal pushbacks of people seeking asylum at their border. EU and international law is crystal clear on this, it is unlawful to summarily return people who cross a border irregularly without an assessment of their circumstances.”

Amnesty calls on Poland’s government to end pushbacks, repeal the amendment about the border closure, and to ensure those seeking protection can safely access its territory.

On 25 August, the European Court of Human Rights ordered Poland to provide this group of 32 Afghans with “food, water, clothing, adequate medical care and, if possible, temporary shelter”. On 27 September, the Court extended the order “until further notice” and also ordered that as long as the group were on Polish territory, they should not be returned to Belarus.

Despite this, the group was returned to Belarus under a Polish ministerial decree of August 2020 which establishes that, except for people falling under certain categories, those intercepted in the border area must leave Poland and be “returned to the state border line”.

At least five people have died at the border since September, with the most recent death - that of a 24-year-old Syrian man - being reported by the Polish authorities on 14 October.

The Polish border has been under a state of emergency since 2 September, and therefore remains out of bounds for journalists, MPs and activists.