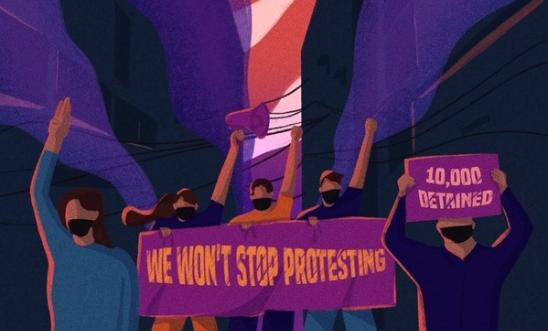 © Illustration credited to the artist: JC

Thousands have been killed and arrested since the military took power

‘Although our lives are in danger, we choose to continue. We will keep asking the world to help us because people are being killed in Myanmar’ - Zin Mar, protest leader

Myanmar’s activists continue to protest the regime’s human rights abuses despite facing serious danger, Amnesty International revealed today while marking one year since the Association of Southeast Asian Nations (ASEAN) adopted a Five-Point Consensus, which has failed to stop the regime’s violence in the country.

Amnesty conducted in-depth interviews over several months with people who have continued to take part in non-violent protests across five of Myanmar’s states and regions. The 17 interviewees were from a diverse array of protest groups, including LGBTQ and women’s rights organisations.

Across the country protests include ‘flash mobs’ in which activists run through the streets for a few minutes before dispersing to avoid being shot, arrested or run over by military vehicles. There are ‘silent strikes’ during which shops and businesses shut, roads are empty and people stay at home to demonstrate defiance to military rule.

Activists also distribute pamphlets on buses, post messages against the military on walls with stickers or spray paint, and encourage boycotts of goods and services with ties to the military.

“These activists urgently need the support of the international community in the form of a global arms embargo to stop the Myanmar military from using weapons of warfare to kill peaceful protesters.

“Despite the immense dangers and hardships, there are still many activists and human rights defenders who choose to remain in Myanmar and are unwavering in their commitment to continue peacefully protesting and expressing their dissent.

“ASEAN must call on the Myanmar military authorities to immediately stop all violence against peaceful protestors in line with the stalled Five-Point Consensus. It also needs to continue to condemn all human rights violations in Myanmar and call for the release of all people who are being arbitrarily detained.

“It needs to do this now to prevent the Myanmar people from further suffering.”

In the days immediately following the coup, Amnesty and many other human rights groups urged the military to stop the use of unlawful and lethal force against peaceful protesters. The violence has prompted many to join armed resistance groups, which are active throughout the country.

Amnesty has called on the military to exercise restraint, abide by international law, and for law enforcement duties to be fully resumed by police.

These calls have gone unheeded. More than 1,700 people have been killed, and more than 13,000 arrested since the military took power, according to the Assistance Association for Political Prisoners.

Activists and human rights defenders interviewed by Amnesty described witnessing or experiencing abuses by military forces while demonstrating, including shootings, beatings, and attempts to ram vehicles into protests.

Towards the end of last year, there was a noticeable fall in the number of people who joined protests in the streets.

Thiri*, a university student in Mandalay who said she had no interest in politics before the coup but is now one of the leaders of a women’s protest group, said:

According to some of the activists Amnesty spoke to, this drop in numbers was part of a deliberate strategy to keep everyone safe by protesting in smaller groups.

Rina, a university student and member of the General Strike Committee in Yangon, said that it had become “too dangerous” to protest in large groups.

She participated in a flash mob with around 20 other people on 5 December 2021, and told Amnesty that on that day, a military truck drove straight into them.

“As I was running, I saw some of the other people who joined in the flash mob had been hit [by the military truck]. Some of them were rolling on the pavement.”

In the Kachin State capital of Myitkyina, a university student who has been protesting with the University of Myitkyina Students’ Union, said that they usually go out in smaller groups because “if there are too many people in the protest, it is easier to get arrested”.

Zin Mar, another university student who is a protest leader in Monywa, said that although her protest group sometimes had to reduce the number of people demonstrating for security reasons, they were determined to continue. She said:

“We will always come out whenever we can."

Min Thu, a high school student who is a leading member of the Mandalay Youth Strike Committee, has witnessed at least three times unmarked vehicles that he believes belong to the military and police drive into protesters. In October last year, a motorcycle nearly hit him when he was about to join a protest. Min Thu said:

“Just before we started the protest, they tried to hit me [with the vehicle] from the front. I escaped by going to the nearest road and then they got down from their vehicle and pointed guns at me. They didn’t shoot me because they had blocked all the angles, and they thought they would arrest me.”

He told Amnesty  that he dodged onto a side street and barely escaped.

In Sagaing region’s Salingyi and Yinmarbin townships, poet and engineer Yar Zar has regularly organised people across villages to protest since March 2021, and was at two protests when soldiers and police opened fire at the crowd.

To avoid encountering soldiers, he and his team carefully prepare routes along narrow, unpaved streets. He is one of several people who told Amnesty that they also rely on volunteers to check and make sure the route is clear before they demonstrate.

“When we protest in the village, some protesters who act as lookouts escort us so we can avoid the military. Once they have passed, we start our protest again.”

Life on the run

Many activists described how they felt they were being constantly watched and followed by civilian informants known as dala or by soldiers and police wearing civilian clothes and driving unmarked vehicles.

Myat Min Khant of the All Burma Federation of Student Unions said that the military and police roam streets disguised as fruit sellers or trishaw, motorcycle, or taxi drivers and embed themselves among the people to identify anyone daring to express dissent.

There are numerous checkpoints in towns and cities around the country where people are stopped at random, and their belongings are searched by soldiers and police.

Most of the activists who spoke to Amnesty said that they have left their homes fearing for their safety, with several not being able to return since February 2021.

“If I go back home, the military may be waiting to arrest me. Even my family members do not know my whereabouts.”

BP, a protest leader who has demonstrated on the streets of Kalay, Sagaing region every day since 7 February 2021, said that a convoy of five vehicles full of soldiers raided his family home three times in one day in September 2021. He is one of four protesters interviewed who said their homes have been raided since  going into hiding.

Many said it is becoming increasingly difficult to find safe places to hide. BP said he regularly sees strangers who he believes are plainclothes informants loitering near where activists are staying or following them on motorbikes while carrying walkie-talkies.

U Yaw, a monk from Ayeyarwady region who has been actively protesting since the early days after the coup, had been in hiding since March 2021 when his monastery was raided. During the raid, as U Yaw hid in a toilet stall, he overheard soldiers saying that if they found him, they should “just shoot him dead and get rid of him”.

In many cases, soldiers and police arrest activists’ family members and loved ones when they can’t find the activists. According to media reports, this includes a politician’s 94-year-old mother who was arrested and an activist’s four-year-old daughter.

In November last year, the military attempted to raid the house of another protest leader who had gone into hiding. The activist said:

“When they arrived, they started shooting, but they went to the wrong house. They mistakenly went to our neighbour’s house and one woman was killed in the shooting.

In spite of this, she is determined to continue organising peaceful protests.

“I cannot sit quietly when I see injustice,” she said.

“Although our lives are in danger, we choose to continue. We will keep asking the world to help us because people are being killed in Myanmar.”

*Note: In several cases pseudonyms have been used at the request of interviewees.