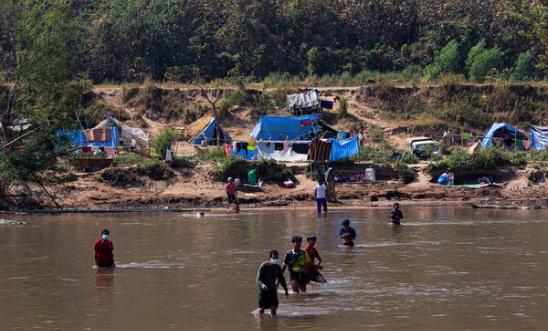 The report, “Bullets rained from the sky”: War crimes and displacement in eastern Myanmar, found that Myanmar’s military subjected civilians in Kayin and Kayah states to torture and extrajudicial executions in widespread aerial and ground attacks, arbitrary detentions, and systematically looted and burned villages.

The violence reignited in the wake of last year’s military coup and escalated significantly from December 2021 to March 2022. Hundreds of civilians have been killed, and more than 150,000 people displaced. Entire villages have been emptied and, in some cases, people have had to repeatedly flee for their lives.

“The world’s attention may have moved away from Myanmar since last year’s coup, but civilians continue to pay a high price. The military’s ongoing assault on civilians in eastern Myanmar has been widespread, systematic and likely amounts to crimes against humanity.

“The ongoing killing, looting and burning bear all the hallmarks of the military’s signature tactic of ‘collective punishment’, which it has repeatedly used against ethnic minorities across the country.”

Direct targeting of civilians
For decades, ethnic armed organisations in Myanmar, including in Kayin and Kayah states, have been engaged in struggles for greater rights and autonomy.

The military repeatedly fired explosive weapons into populated civilian areas. Dozens of witnesses told Amnesty about barrages that lasted for days at a time. The organisation documented 24 attacks by artillery or mortars between December 2021 and March 2022, which killed or injured civilians, and destroyed homes, schools, health facilities, churches, and monasteries.

On 5 March 2022, as families were at dinner, the military shelled Ka Law Day village in Hpapun Township, Kayin state, killing seven people, including a woman who was eight months pregnant. A close relative said he had to sit in his house all night with the bodies, unable to bury them until morning, when the shelling finally stopped.

Many people described the military’s use of fighter jets and attack helicopters as particularly terrifying. Witnesses described not being able to sleep at night out of fear of air strikes or fleeing to seek shelter in bunkers and caves.

Amnesty documented eight air strikes on villages and an internally displaced persons (IDP) camp in eastern Myanmar in the first three months of 2022. The attacks, which killed nine people and injured at least nine others, destroyed civilian homes and religious buildings. In almost all documented attacks, only civilians appear to have been present.

In one case, at around 6pm on 23 February 2022, a fighter jet fired on Dung Ka Mee village in Demoso Township, Kayah state, killing two civilian men and injuring several others. Witnesses told Amnesty the attack was completely unprovoked.

A 46-year-old farmer who witnessed the attack, said the military aircraft made three passes, firing guns and a rocket. He said:

“When that fighter jet was flying toward us in a nose-down position, I was numb… When they fired the rocket, I got myself together and realised I had to run [to a bunker]… We were shocked to see the dust and debris come towards us… There is a two-story building… The family lives upstairs and downstairs is a mobile phone store. This building collapsed and it was also on fire.”

Another witness, a 40-year-old farmer, saw the remains of a neighbour’s body. He told Amnesty:

Extrajudicial executions
The report documents how Myanmar’s military carried out arbitrary detentions of civilians on the basis of their ethnicity, or because they were suspected of supporting the anti-coup movement. Often, detainees were tortured, forcibly disappeared or extrajudicially killed.

In one of many cases where soldiers extrajudicially executed people who were collecting food or their belongings, three farmers from San Pya 6 Mile village in Kayah state went missing in January 2022. Their decomposed bodies were found in a pit latrine two weeks later.

In a massacre that prompted rare international condemnation, soldiers near Mo So village in Kayah state’s Hpruso Township reportedly killed at least 35 women, men and children on 24 December 2021, then burned their bodies. Doctors who examined the bodies reportedly said many had been tied up and gagged, and their wounds suggested they had been shot or stabbed. Amnesty maintains that the incident must be investigated as a case of extrajudicial executions. Such killings in armed conflict constitute war crimes.

Witnesses also described Myanmar’s military shooting at civilians, including those attempting to flee across a river along the border with Thailand.

Following a pattern from previous military operations, soldiers have systematically looted and burned large sections of villages in Kayin and Kayah states. Witnesses from six villages reported having items including jewellery, money, vehicles and livestock stolen, before their homes and other buildings were burned.

Eyewitnesses who fled Wari Suplai village, on the border of Shan and Kayah states, said they watched as houses went up in flames after most villagers fled on 18 February 2022. They told Amnesty that the burning went on for days, destroying more than two-thirds of the houses.

Amnesty’s analysis of fire data and satellite imagery shows how villages were burned, some of them multiple times, in parts of Kayah state. The burning directly tracks military operations from village to village in February and March 2022.

A defector from the military’s 66th Light Infantry Division, who was involved in operations in Kayah state until October 2021, told Amnesty that he witnessed soldiers looting and burning homes. He said:

“They don’t have any particular reason [for burning a specific house]. They just want to frighten people and send the message that ‘This is what we’ll do if you support [the resistance fighters].’  It is also to stop the supply and logistics for local resistance forces… [Soldiers] took everything they could [from a village] and then they burned the rest.”

Displaced people are enduring dire living conditions. They lack food and health care, and the military continues to block humanitarian aid. Aid workers spoke of growing malnutrition and growing difficulties to reach displaced people due to violence and military restrictions.

“Donors and humanitarian organisations must significantly scale up aid to civilians in eastern Myanmar, and the military must halt all restrictions on the delivery of aid.

“The military’s ongoing crimes against civilians in eastern Myanmar reflect decades-long patterns of abuse and flagrant impunity. The international community – including ASEAN and UN member states – must tackle this festering crisis now. The UN Security Council needs to impose a comprehensive arms embargo on Myanmar and refer the situation to the International Criminal Court.”

Methodology
The report is based on research carried out in March and April 2022, including during two weeks on the Thailand-Myanmar border. Amnesty interviewed 99 people, including dozens of witnesses or survivors of attacks, and three defectors from Myanmar’s military.