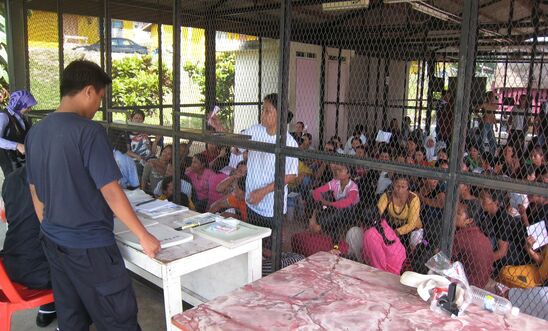 More than 1,200 people to be returned to Myanmar next week

The Malaysian government must stop planned efforts with the Myanmar military to deport 1,200 people back to Myanmar next Tuesday (23 February), Amnesty International said today.

The ongoing crackdown on dissidents following the military coup in Myanmar puts those due to be deported at serious risk of further human rights violations.

The Malaysian government has not permitted the United Nations High Commission for Refugees (UNHCR) to access immigration detention centres since August 2019. The international body has not been able to visit detention centres to identify asylum seekers and refugees, and facilitate their release, leaving them to languish in captivity. The arbitrary and indefinite detention of migrants, asylum seekers and refugees is in violation of international human rights law.

“The Malaysian government is recklessly imperilling the lives of over 1,000 Myanmar people by deporting them under a curtain of secrecy to a country in the middle of a coup marred by human rights violations.

“The Malaysian Immigration authorities claim their ‘repatriation program’ does not involve refugees or asylum seekers - but how have they determined this if the UN has been prevented from accessing people in immigration detention for over one-and-a-half years?

“The UNHCR must immediately have full access to the 1,200 people. Prime Minister Muhyiddin Yassin must instruct the immigration department to work closely with UNHCR to ensure not a single person seeking asylum, refugee or anyone who may be at risk of human rights violations is forced to return to Myanmar.

“The Malaysian government must ensure there is a guarantee of safety for returnees.”

Mass deportation exercises carried out with little transparency also contravenes Malaysia’s obligations to respect and protect the rights of migrants and refugees, and risks endangering their lives.

The planned deportation once again puts Malaysia’s immigration and refugee policies in the spotlight. The Human Rights Commission of Malaysia reported in 2018 that conditions in immigration detention centres continue to be cramped, unsanitary, poorly maintained, and lacking in basic facilities such as clean water and food. There have also been first-hand and witness accounts of physical abuse of detainees.

In August 2020, the government acknowledged that 23 detainees, including two children, died in immigration detention centres the first half of that year. In October, the government revealed that 756 children were being held in these facilities, in violation of the UN Convention on the Rights of the Child (CRC), which bars the detention of children for immigration offences.

Throughout 2020, immigration officials and police have conducted raids against people in migrant communities in Malaysia that have violated their rights and undermined COVID-19 preventative measures.

“The situation of those in immigration detention in Malaysia is horrendous. Beyond granting UNHCR access to those due to be deported, the government must also allow it full access to all those currently in detention facilities. The detention of people solely for immigration control is unjustifiable.

The Malaysian government confirmed plans reported in the media to deport 1,200 people of Myanmar origin on navy ships provided by the country’s military on 23 February.

On 15 February 15, Khairul Dzaimee Daud, the director-general of the Immigration Department, said the deportation will involve individuals who violated immigration laws, including offences such as not carrying identity documents, overstaying, and misuse of visit passes.

Yesterday, the Immigration Department confirmed its plans to proceed with the deportation.