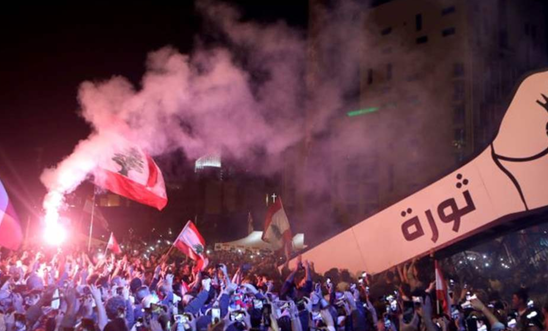 Protesters describe being dragged from the street, set upon by stick-wielding military officials, and tortured in secret detention

Two men say they were blindfolded and subjected to mock executions

‘During the interrogation, they hit me and asked me who was paying us’ - Khaldoun Jaber

The Lebanese armed forces must end the arbitrary arrests and torture of peaceful protesters, Amnesty International said, after gathering harrowing testimony of abuse meted out to protesters.

Past weeks have seen scores of protesters arrested by both the military and civilian security forces across Lebanon.

Amnesty has analysed video footage and medical records, and conducted interviews with eight of those recently detained, as well as a lawyer representing a number of protesters.

Protesters describe being subjected to a catalogue of abuse - including arrests without a warrant, severe beatings, insults and humiliation, blindfolding, and forced confessions.

Some were detained in unknown locations, denied access to lawyers or contact with their families, were prevented from accessing medical care, and had their phones searched. Two former detainees told Amnesty they were subjected to mock executions. In seven of the cases documented by Amnesty, military forces, including military intelligence, conducted the arrests and the beatings. All seven of these individuals were subsequently released following detention periods ranging from several hours to six days.

In one case, on 14 November, Samer Mazeh and Ali Basal were in Gemmayzeh, a main street close to central Beirut where protesters have been gathering, when a group of around five men in civilian clothing approached them. An army vehicle then arrived and a member of the army intelligence forces jumped out and attacked the two men.

“He pressed my face to the ground and handcuffed me. They moved me to the vehicle where I was beaten. They covered my face with my shirt and put my head down. Ali was arrested too, and they made him sit on my head. I said I was suffocating. One of them said I don’t care if you suffocate.”

According to Samer and Ali, they were taken blindfolded to an unknown location and forced onto their knees, while their captors loaded their weapons and placed rifles at their heads.

In another case - on 13 November in the city of Baabda, where a peaceful protest was taking place near the presidential palace - Khaldoun Jaber was approached by two men in civilian clothing who said they wanted to talk to him. However, says Jaber, he was dragged away from protesters and set upon by a group of around 30 men wearing military intelligence force vests who severely beat him with sticks.

“They blindfolded me and moved me to an unknown place. Later I knew from the lawyer that I was being detained at the Ministry of Defence. During the interrogation, they hit me and asked me who was paying us, who was pushing us to take to the streets, and who was feeding us. I was hit with sticks on my back, on my ribs, and on my leg. I was not allowed to contact a lawyer or my family, who did not know where I was.”

Lebanon’s Lawyers’ Committee has filed complaints for a number of cases, including some documented by Amnesty. Amnesty is calling on the authorities to stop trying civilians in military courts and to ensure that perpetrators of torture and other ill-treatment are promptly, thoroughly, and effectively investigated by a civilian justice system - and not the military justice system - to ensure impartiality and to provide victims with their right to a remedy.

“Over the past three weeks, we have seen the military beat and drag through the streets peaceful protesters.

“The Lebanese Armed Forces must immediately put an end to these abusive practices and ensure it is protecting the rights of peaceful protesters to their freedom of peaceful assembly and expression.

“These cases must be investigated by a civilian court, in accordance with Lebanon’s anti-torture law and its legally-binding international obligations.”

Chris Haddad was also amongst those brutally beaten, dragged on the street, and then arrested by the army on 5 November in Jal el Dib, along with eight other protesters.

“Three soldiers attacked me with their sticks. They put my jacket on my face and dragged me as they were hitting me on my back all the way to the opposite side of the road where they had their vehicles parked.”

Fadi Nader was also amongst those beaten and arrested by the army on that day.

“They hit me aggressively and dragged me to the other side of the road. I tried to escape but they caught me again. When they put me in the military vehicle, a soldier hit me on my head with a stick. They knew very well who to arrest as most of us were known faces during this protest movement. We were beaten in the vehicle several times.”

Two other individuals also recounted to Amnesty how, on 26 October, a large group of soldiers attacked and then arrested them, taking them away from the shops where they worked, as a protest was taking place in Beddawi in the city of Tripoli. Both were subjected to verbal and physical abuse, sustaining serious head wounds. The Lebanese Armed Forces refused to communicate their whereabouts to their lawyers or families until their release from a military prison six days after their arrest.