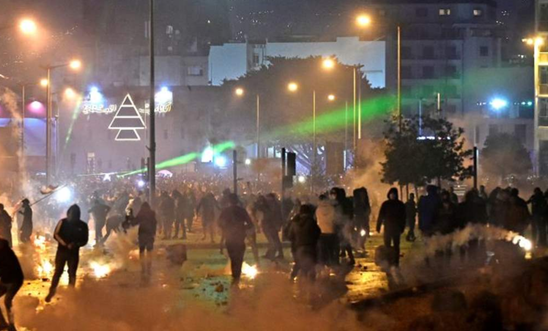 In most violent nights since protests began, at least 409 protesters injured, with one person blinded and others needing surgery after police shot protesters at close range

‘I could not see the other detainees, but I could hear them screaming’ - protester

The Lebanese security forces’ unlawful use of rubber bullets at the weekend left hundreds of protesters injured, some seriously, in the most violent weekend since eruption of protests in the country more than three months ago.

With protests likely to continue in coming weeks, Lebanon’s newly-formed government must prioritise the reining in of the security forces, and ensure their unlawful use of force, beatings, rape threats and arbitrary arrests are fully investigated.

Riot police were often shooting directly into crowds at chest level, and many injuries were to the upper-body - specifically eyes, neck, chest, upper arms and stomach. The Lebanese Red Cross said that at least 409 protesters were injured over the two nights.

Michel Razzouk, 47, told Amnesty how he was shot at close range on the night of 18 January, after which a group of riot police beat him for 15 minutes:

“I felt something that hit me that took my breath away. I felt I was pounded down by a ton of weight and didn’t realise what was happening. One guy had shot me straight in the stomach; he was about four to five metres away. I’m not sure the other policemen even realised that he had shot me, and they started beating me up.”

Amnesty obtained footage of the rubber bullet which was later removed from Michel’s stomach with its casing intact, indicating it had been fired at close range.

Another protester, Jean George Prince, was wounded by a rubber bullet on 18 January. He told Amnesty he was protesting peacefully near Le Gray Hotel in central Beirut when he was hit in the face by a rubber bullet. He suffered a complete laceration of his lower lip and underwent four hours of reconstructive surgery involving more than 50 stitches.

“We were peaceful protesters, forming a line in front of the riot police. We weren’t moving towards them … I saw one of them shooting and pointing directly at the people. I saw a guy getting shot next to me. Then I took a shot in the face.”

Amnesty interviewed other eyewitnesses who also reported that riot police fired rubber bullets directly at them on Saturday night. A surgeon at Hotel Dieu hospital said they had treated four cases of head injuries from rubber bullets, including one person who has suffered permanent loss of their eyesight.

According to eyewitnesses and videos posted online, a few dozen protesters threw stones, firecrackers, traffic signs and street plants in the direction of riot police. However, the fact that a minority of protesters may have engaged in individual acts of violence does not render an entire protest unpeaceful or justify its forcible dispersal.

General Emad Othman, Internal Security Forces Director, claimed that force was used in response to acts of “violence and vandalism” from “non-peaceful protesters”. The authorities say that 142 members of the security forces were injured on the night of 18 January.

“The level of police violence we documented on Saturday and Sunday was unprecedented and indicated a clear escalation on behalf of the authorities.

“During the two most violent nights since Lebanon’s protests began almost 100 days ago, the security forces aimed rubber bullets at protesters’ upper bodies, and fired tear gas and water cannon at close range - all of which will cause certain harm to protesters.

“The new minister of interior must immediately rein in the Internal Security Forces, and order them to comply with international standards and respect the right to assembly.

“The judicial authorities now have a crucial role to investigate the events of the weekend to provide redress for the victims and send a strong signal that this violence will not be tolerated.”

At the weekend, police arbitrarily arrested dozens of protesters, and at least two women told Amnesty that policemen had threatened them with rape.

The Lawyers’ Committee to Defend Protesters confirmed that the security forces arrested at least 43 protesters on the night of 18 January. Eleven were released later the same night while the rest were released the next morning. The Internal Security Forces kept their mobile phones, saying the measure followed a judicial order issued in that regard.

Amnesty spoke to one female protester who witnessed the arrest of her male friend on Saturday night on Pasteur Street in Beirut. When she asked police where they were taking him, they used abusive language and threatened to arrest and rape her.

Shatha Hassanieh, who was arrested on Saturday night, told Amnesty she was in Saifi in central Beirut when riot police arrested her without charge at around 8.30pm.

“While I was walking with the officer, others were approaching me in an aggressive manner to frighten me and they were threating to beat me. One of them said, ‘They will rape you inside’. When we reached the vehicle, I saw them beating a number of arrested protesters … At Helou Station, I saw them beat every detained protester stepping out of the vehicle. They kept me in a separate room for half an hour. I could not see the other detainees, but I could hear them screaming.”