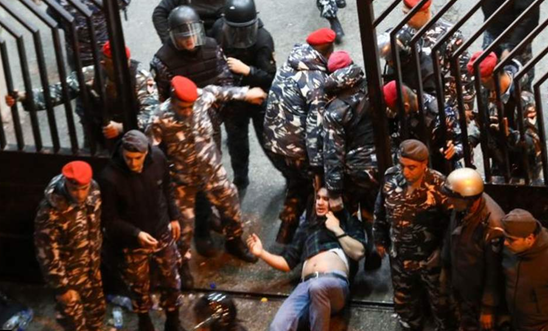 Security forces brutally beat and drag protesters through the streets

The Lebanese security forces - including anti-riot police - used excessive and unlawful force against protesters on the nights of 14 and 15 January, subjecting scores of peaceful protesters to brutal beatings and carrying out waves of arbitrary arrests.

The Lawyers’ Committee to Defend Protesters in Lebanon estimates that as many as 100 people across the country - including five children - have been arrested since Tuesday night.

The Lebanese Red Cross reports that 47 people were injured on Wednesday night, 37 of whom were taken to nearby hospitals.

The recent escalation took place as protesters called for a “Week of Rage” in reaction to the spiralling economic crisis and what they say is the authorities’ failure to take any meaningful measures to address the crisis.

Last October, a wave of nationwide protests erupted in Lebanon against a political class accused of creating Lebanon’s worst economic crisis since the country’s 1975-1990 armed conflict.

“What we have witnessed in the past couple of days is an alarming attack on freedom of assembly and expression.

“Security forces brutally beat protesters, dragging them on the street into the police station, verbally and physically abusing them; they also fired significant amounts of tear gas in residential areas.

“Acts by a minority of protesters who vandalised banks or threw stones is never a justification for such excessive use of force and sweeping arrests.

“We are also alarmed that over the past two days security forces attacked at least eight photojournalists and cameramen, threatening and beating them, and also destroying their equipment.

“We call on the authorities to immediately end the use of excessive force, immediately release anyone detained for peaceful protest, and hold those responsible for arbitrary or abusive force responsible in a transparent and impartial manner.”