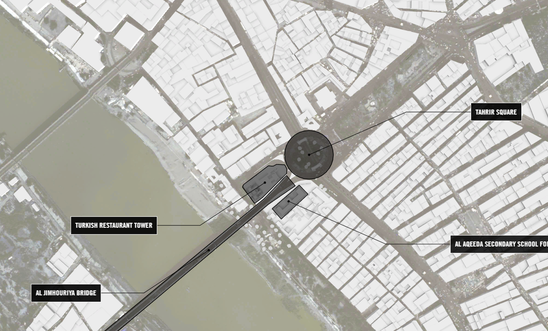 Injuries were among most graphic ever seen by Amnesty investigators

‘These munitions have no legitimate use in policing demonstrations’ - Brian Castner

An exclusive new investigation by Amnesty International and New York-based SITU Research shines fresh light on how the Iraqi security forces intended to kill or severely maim dozens of protesters when they fired military-grade grenades directly into crowds on the streets of Baghdad during the protests that erupted last October.

In multiple videos taken from different vantage points on or near the Jimhouriya Bridge in Baghdad, masked security forces at barricades and on a patrol boat can be seen firing the grenades at a low angle directly towards a crowd of protesters nearby. In other footage, the grenades can be seen hurtling past the protesters’ heads at high velocity.

Through reviewing eyewitness video as well as gathering testimonies from protesters and medical workers, Amnesty has documented more than two dozen deaths caused by these heavy grenades since the protests began in October. Since the research relied on verifying available video evidence and corroborating with testimony on the ground, the real number may be much higher.

In a new interactive website - Smokescreen: Iraq’s use of military-grade tear gas grenades to kill protesters - the two organisations have created a 3D reconstruction of several deadly incidents captured on video around the capital’s Tahrir Square and Jimhouriya Bridge. The distinctive grenades are known to have killed at least two dozen protesters in that area since October.

Ballistics simulations and spatial analysis presented on the Smokescreen website show how the projectiles were fired to kill or cause serious bodily harm.

SITU Research used digital modelling to simulate firing one of the grenades into ballistic gelatin - a technique commonly used by weapons and forensics experts to test the type and severity of wounds caused by bullets and other projectiles. The smoker grenades had a remarkably similar impact on the gelatin as a 12-gauge shotgun slug specifically designed for hunting. In other words, when fired directly at a target at a low angle, the so-called “less lethal” grenades are every bit as deadly as heavy ammunition that is expressly designed to kill.

“Overwhelming evidence points to a pattern of Iraq’s security forces deliberately using these heavy tear gas and smoke grenades to kill - rather than disperse - protesters, in direct violation of international human rights law.

“The security forces knew how deadly these abhorrent weapons were, but continued to fire at will, leading to a string of at least two dozen gruesome fatalities.

“This new analysis just reinforces our belief that these munitions have no legitimate use in policing demonstrations.

“The Iraqi authorities must recall these grenades from use immediately, and there must be independent and impartial investigations into their use and into the wider pattern of violations that resulted in hundreds of killings and thousands of injuries during the protests.”

“The videos analysed for this report clearly show a pattern of abuse and lethal use of force against Iraqi civilians.

“It is critical to analyse these weapons in relation to the urban spaces in which they are deployed - this visual investigation tracks the performance of the weapon in relation to the streets, plazas and spaces of assembly where so many have been killed.”

Today’s new research builds on an earlier Amnesty investigation that first identified the distinctive grenades (dubbed “smokers” by some protesters) as two types based on high-explosive military grenades designed for combat. These include M99 grenades made by Serbian manufacturer Sloboda Ĉaĉak, as well as M651 tear gas grenades and M713 smoke grenades manufactured by the Iranian company Defense Industries Organisation.

These grenades are up to ten times heavier than standard tear gas canisters - weighing around 250 grams. However, they are fired at roughly the same muzzle velocity - the speed at which they leave the grenade launcher - meaning they have significantly more force upon impact, especially when fired at a low angle.

Such force resulted in horrific casualties as heavy metal slugs pierced protesters’ skulls and torsos, with smoke often seen billowing from open wounds. The fatalities were among the most graphic ever seen by the experienced Amnesty investigators verifying the videos.

Disturbingly, following a lull in their use in late November and December, images emerged showing fresh use of the grenades in January and February.

Massive use of force

Since 1 October 2019, throughout the protests in Baghdad and southern Iraqi governorates, Amnesty has documented security forces using excessive - and, in hundreds of cases, lethal - force to disperse protesters in a variety of other ways. This includes masked gunmen and snipers using live ammunition, hunting rifles and shotguns firing pellets and birdshot, batons used to mete out severe beatings and a host of other instances of inappropriate and unlawful weapon use.

Despite this widespread arbitrary use of force, including hundreds of killings, virtually nothing has been done to hold the Iraqi security forces to account.