Hong Kong: Tiananmen anniversary arrests 'an insult to the memory' of victims 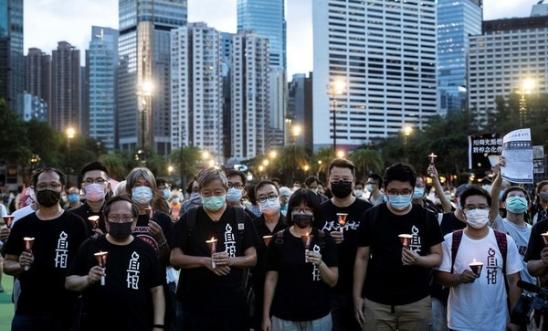 Vigils held this week in 20 cities around the world including London, Edinburgh, San Francisco and Seoul

Activists in London and Edinburgh gather today to demand justice for those killed in Beijing on 4 June 1989, and protest the ongoing crackdown on Hong Kong’s annual vigil

Responding to the arrests of at least two people and around a dozen people being taken away in the last two days for attempting to commemorate the 33rd anniversary of the Tiananmen crackdown, Hana Young, Amnesty International’s Deputy Regional Director, said:

“The use of spurious charges of ‘sedition’ and ‘unauthorised assembly’ to arrest people attempting to peacefully commemorate the Tiananmen crackdown in Hong Kong is an attack on the right to freedom of expression and an insult to the memory of those who lost their lives on 4 June 1989.

“The harassment and indiscriminate targeting by the Hong Kong Police of people for peacefully honouring the memory of victims of the Tiananmen crackdown lays bare the dismal state of human rights in the city.

“The creativity and determination of those who came out to commemorate the Tiananmen crackdown, despite the threat of arrest and harassment, shows that the truth can never be completely silenced by repressive governments. Hongkongers continue to stand up for their rights and for the rights of those in mainland China.

“The Hong Kong authorities must end their politically motivated campaign to silence people daring to hold China to account over the horrific events of June Fourth.

“All those arrested merely for exercising their human rights to freedom of expression and peaceful assembly must be immediately and unconditionally released.”

At least 12 people were taken away in the vicinity of Victoria Park in Hong Kong today for peacefully commemorating the Tiananmen Square crackdown. Others were harassed by the police for carrying flowers, handing out pieces of white paper, holding a toy tank or turning on the flashlights on their phones.

One man was arrested for suspected “unauthorised assembly” and on 3 June, an artist was arrested under “sedition” charges after he staged a street performance.

Every year on 4 June since 1990, up to hundreds of thousands of people joined a candlelight vigil in Hong Kong’s Victoria Park to remember those killed during the Tiananmen crackdown. They called on the Chinese authorities to reveal the truth about what happened and take accountability for the fatalities. The vigil has been banned for the past two years, ostensibly on Covid-19 grounds. This year authorities closed parts of Victoria part citing potential “illegal activities” and heavy police force patrolled the area.

The organiser of the vigil, the Hong Kong Alliance, was forced to disband in September 2021 after coming under increasing pressure since the enactment of Hong Kong’s national security law in June 2020. Several of its senior figures are currently in jail.

The Alliance is one of several prominent civil society organisations forced to close since last year after being targeted by the Hong Kong police on national security grounds.

Every year the vigil in Hong Kong featured a recorded message from the Tiananmen Mothers, family members of those killed, who are still seeking a full government account of the deaths, lawful compensation and investigation of criminal responsibility. Frequently harassed and prevented from mourning, this week key members of the group report they are being prevented from receiving international phone calls.

Hundreds – possibly thousands – of people were killed in and around Beijing’s Tiananmen Square on 4 June 1989 when Chinese troops opened fire on students and workers who had been peacefully calling for political and economic reforms as well as an end to corruption. Tens of thousands were arrested across China in the suppression that followed. Many were charged with counter-revolutionary crimes and served very long prison sentences following unfair trials. Regularly since 1989, activists in mainland China have been detained and charged with “subversion” or “picking quarrels” if they commemorated those who were killed, called for the release of prisoners, or criticised government actions during the Tiananmen crackdown.

Vigils held around the world

This year, Amnesty and other groups have organised a series of global candlelight vigils and other events commemorating the victims of the Tiananmen crackdown, in solidarity with the Tiananmen mothers and with Hong Kong amid increased repression in the city.