UK: Tiananmen square vigils to be held in London and Edinburgh 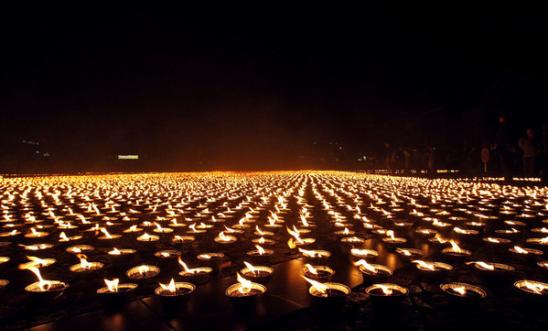 Activists demand justice for those killed in Beijing on 4 June 1989, and protest the ongoing crackdown on Hong Kong’s annual vigil

AV materials available on 4 June, the 33rd anniversary of the Tiananmen crackdown

Hong Kong’s suppressed Tiananmen vigil will be recreated on Saturday 4 June as people in London, Edinburgh and more than 20 other cities around the world light candles in remembrance of all those killed in the 1989 Beijing crackdown.

The annual Hong Kong event ran for more than 30 years but has been banned since 2020 amid increased repression in the city. Amnesty International is co-hosting a series of global vigils and other events to demand justice and to show solidarity with Hong Kong.

Amnesty activists will attend vigils at the Chinese Embassy in London and in Roseburn Park in Edinburgh, starting at 7.30pm on Saturday 4 June. Media are invited to attend.

For three decades, Hong Kong hosted the world’s biggest commemoration of the Tiananmen crackdown, when hundreds, possibly thousands, of people were killed after Chinese troops opened fire on students and workers who were peacefully calling for political and economic reforms, as well as for an end to corruption.

On 4 June every year since 1990, tens of thousands of people joined a candlelight vigil in Hong Kong’s Victoria Park to remember those killed. They called on the Chinese authorities to reveal the truth about what happened and take accountability for the deaths. The vigil has been banned for the past two years, ostensibly on Covid-19 grounds.

The vigil’s organiser, the Hong Kong Alliance, was forced to disband in September 2021, after coming under increasing pressure since the enactment of Hong Kong’s national security law in June 2020. Several of its senior figures are currently in jail. The Alliance is one of several prominent civil society organisations forced to close after being targeted by the Hong Kong police on national security grounds.

On this year’s 33rd anniversary of the deadly crackdown, vigils and related events – organised by Amnesty and other groups – will take place in cities around the world, including San Francisco, Washington DC, Seoul, Taipei, Sydney, Oslo, Paris, and Amsterdam.

“The Chinese government’s concerted efforts to erase the Tiananmen crackdown from history have spread to Hong Kong since the national security law was enacted there in 2020. But the atrocities of 4 June 1989 must never be forgotten.

“This 4 June, people will come together around the world to remember those killed in Beijing 33 years ago, and to stand in solidarity with those in Hong Kong whose peaceful acts of commemoration are now criminalised.

“The simple act of lighting a candle for Tiananmen has become a crime in Hong Kong, just as it has been in mainland China for more than 30 years. But history cannot be erased, and activism will never be silenced.

“Just as Hongkongers once stood in solidarity with the victims of Tiananmen, the rest of the world now stands with the people of Hong Kong to the deliver the same message: repression will not be tolerated anywhere.”

Details of vigils in London and Edinburgh

What: Candlelit vigils to commemorate the Tiananmen Square crackdown of 1989

Who: Amnesty International activists and spokespeople will be in attendance, and available for interviews