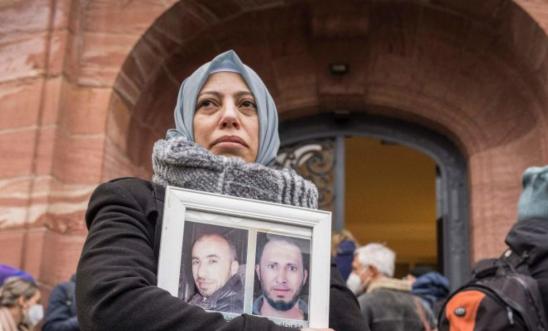 Case follows jailing of another Syrian in Germany last year

‘States across the globe must follow Germany’s lead’ - Lynn Maalouf

Responding to a decision by the Higher Regional Court in Koblenz, Germany this morning, which has seen the conviction of former Syrian intelligence officer Anwar Raslan and his sentencing to life in prison for crimes against humanity - including torture, murder and rape of detainees in Branch 251, an infamous military intelligence facility in Damascus, Lynn Maalouf, Amnesty International’s Middle East Deputy Director, said:

“Today’s verdict is a historic victory that amplifies the voices of tens of thousands of survivors of unlawful detention, torture and sexual violence, as well as the voices of the families of victims who died in Syria’s prisons and detention centres as a result of the treatment of Syrian security forces for over a decade.

“Notably, it also recognises the systematised nature of sexual violence as crime against humanity.

“This wouldn’t have come about without those who dared to share their stories - Syria’s civil society actors, and human rights and litigation organisations who have doggedly pursued justice, truth and reparation over the years.

“Anwar Raslan’s sentence serves as a reminder to the Syrian government - and all those who have committed crimes against humanity with impunity - that justice can be served.

“States across the globe must follow Germany’s lead and initiate similar proceedings against individuals suspected of committing crimes under international law.

“With domestic criminal prosecutions in Syria inconceivable and no pathway for referring cases to the International Criminal Court, universal jurisdiction is the only way to achieve justice.”

In February 2020, German and French police arrested former Syrian intelligence officers Anwar Raslan and Eyad al-Gharib. In a trial which began in April 2020, they were charged with crimes against humanity over the torture of detainees held in Branch 251. On 24 February 2021, Eyad al-Gharib was sentenced to four-and-a-half years in prison for his role in the torture of detainees.

Amnesty has published several reports documenting inhuman conditions across Syria’s prisons, where enforced disappearance, torture and other ill-treatment lead to death in detention, and where extrajudicial executions following sham trials are rife. These crimes amount to crimes against humanity - all countries are permitted, and sometimes obliged, to exercise universal jurisdiction in respect of such crimes.