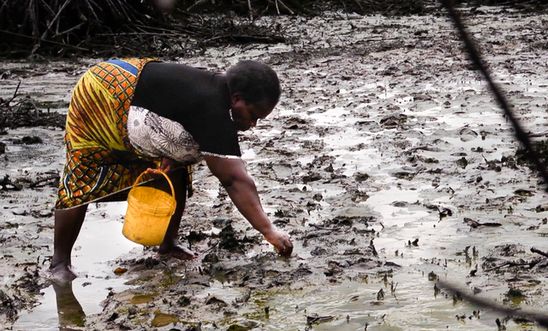 The UK government backed the oil giant Shell and mining multinational Rio Tinto in major human rights cases in the US Supreme Court after being lobbied for support, newly-revealed government documents show.

The documents were obtained by CORE, a network of human rights, development and environmental NGOs - including Amnesty International UK and Friends of the Earth - after a Freedom of Information request was lodged in July 2012. The request related to the UK government’s two interventions in Kiobel-v-Shell (2012) a case against the oil company for its role in alleged crimes against humanity in the Ogoni region of the Niger Delta in Nigeria.  The FOI documents also show that in 2011 the UK intervened in Sarei-v-Rio Tinto (2008), a case which alleged human rights abuses at a copper mine in Papua New Guinea.

The UK submitted expert briefs to the Supreme Court in an effort to secure a ruling preventing future similar actions in the US. The briefs did not deal with the substantive allegations in either case.

The interventions were made while the government was developing an “action plan” designed to implement the UN Guiding Principles on Business and Human Rights, a set of global standards which include a section devoted to access to remedy for victims of corporate abuse.

“In these David versus Goliath encounters, the UK has effectively shielded the interests of powerful companies at the expense of their alleged victims.

“When you consider the gross human rights violations that took place in Nigeria, including extra-judicial killings and torture, and the close relationship that Shell had with Nigeria’s security forces, it is truly shocking that the UK government saw fit to take Shell's side.”

“The UK government has very serious questions to answer about these documents, which tell a sorry and startling tale of confused priorities and policy incoherence. While paying lip-service to corporate responsibility, the government was conniving with multinationals to reduce their exposure to litigation for the worst kind of abuses.

“Unlike Rio Tinto and Shell, victims of corporate human rights abuses do not have a hotline to Whitehall. Governments agreed to address corporate impunity when they endorsed the UN Guiding Principles on Business and Human Rights in 2011, yet less than three years on the situation has deteriorated.”

The 2011 intervention in the Sarei case, jointly undertaken by the UK-Australian governments, appears to have been made in response to a direct request from Rio Tinto. According to a Foreign Office official, the intervention was seen as “…an important opportunity to set a useful precedent for British businesses.”

The government has previously refused to acknowledge that its intervention in the Kiobel case was made at the behest of Shell.  However, a Foreign Office memo dated 11 January 2012 describes how the briefs were prompted by Shell and its lawyers:

“Although Shell have not formally requested intervention by HMG, their Counsel in the US has approached the Counsel who drafted our Rio Tinto amicus brief asking for UK support. [The FCO] have also discussed the case with Shell in London and were asked if HMG would submit an amicus brief.”

It was agreed that the Foreign Office would inform Shell of the decision to intervene but the issue was felt not to warrant a statement to parliament.

The UK subsequently decided to submit a second brief in Kiobel. In an effort to win the support of more countries, it was decided on this occasion that the intervention would be neutral, rather than supportive of Shell. When Shell was informed of the UK’s intention, its Executive Vice President Andy Browne contacted No10 to demand an explanation and to push for a second supportive brief. The UK maintained a neutral stance, though no additional governments joined the brief.