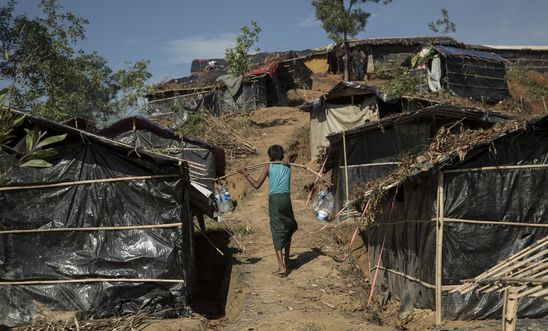 The 70-page briefing, ‘I don’t know what my future will be’: Rohingya refugees in Bangladesh, warns that a ‘lost generation’ of Rohingya children are being systematically denied an education, and documents the sense of hopelessness and uncertainty expressed by many young people in the camps.

Amnesty researchers travelled to Cox’s Bazar in Bangladesh and spoke to 97 refugees in nine camps in February this year. With the situation still dire, Amnesty is calling on the Bangladeshi government to look beyond emergency measures and develop a long-term response to respect and protect the rights of refugees.

"There is a very real danger of a lost generation of Rohingya refugee children. The Bangladeshi government refuses to accept that Rohingya refugees may not be able to return to Myanmar for some time and places restrictions on their lives, including denying children the right to quality education. Even those who have lived in Bangladesh for decades still cannot send their children to school or move around freely.

“Many people we spoke to had spent nearly two years in makeshift shelters which offer no protection from monsoon floods or soaring temperatures. As well as the daily challenges created by the difficult conditions in the camps, people are being pushed to breaking point by the lack of opportunities and uncertainty about the future.

“The Rohingya people have been systematically denied their human rights for generations. Now that many are, temporarily at least, safe from the killing and attacks which they fled, it’s high time their needs as human beings were taken seriously.

“The Bangladeshi government and international community need to understand that Rohingya want more than just to survive. They must take measures to help this traumatised population live fulfilling, dignified lives where they have access to the same rights and opportunities as everyone else.”

No school for Rohingya children

It is estimated that nearly half of the roughly one million Rohingya refugees residing in Bangladesh are under the age of 18. Most fled from Myanmar with their families in the aftermath of the wave of violent attacks that began in late August 2017, and have been in Bangladesh for around two years. Others were born in Bangladesh.

Opportunities for education in Bangladesh have always been extremely limited for Rohingya children, both with respect to the education facilities that have been allowed to operate in the camps and permission for registered Rohingya students to attend local Bangladeshi schools.

In January, the Bangladeshi government issued a notice that secondary schools near Cox’s Bazar were to expel their Rohingya students, who were listed by name.

Mohamed, living in Nayapara Camp, described his daughter’s devastation at the news. He said: “She enjoyed going to school and was learning so much. I encouraged her to keep studying. It is so important that daughters get the same opportunities for education as our sons do. And when they said the Rohingya children could not go to school any more, she came home in tears.”

This is a stark violation of one of the most crucial of these children’s human rights - the right to education - and will have untold consequences for their futures. Young people in the camps described feeling hopeless about the future.

Saeed, a 17-year-old living in Bukhali Camp, said: “I begin every day hoping that it might be different than other days and that something might change. But then it turns out to be like every day. There are no classes to attend and nothing to do. How long can this go on?”

“Sometimes it feels like a small corner of hell”

While refugees said they were grateful to the Bangladesh government, host communities and international organisations for the support provided, their concerns about inadequate living conditions in the camps were evident and well-founded.

As the Rohingya are not allowed to work in Bangladesh, almost everyone Amnesty interviewed was entirely dependent on humanitarian assistance for their daily survival. Yet Amnesty found that in the most basic aspects of humanitarian assistance – shelter, water, sanitation, health and food – the response in Bangladesh is falling short. Refugees spoke of challenges accessing clean drinking water, latrines, safe cooking facilities as well as the insufficient food diversity under the present food distribution system.

Kobir, living in Jamtoli Camp, said: “It is of course good that we are safe. But there is so much emotional and psychological stress for us here. Sometimes it feels like a small corner of hell. Everywhere is dirty. Our houses are unbearably hot. The roofs leak. Our water pumps and toilets are right on top of where we eat and sleep. And we don’t even know what to do about burying our dead. We cannot go on living like this.”

Some of these challenges are inevitable given the size of the camps and the time it will take to upgrade facilities. However, the Bangladesh government’s focus on encouraging returns to Myanmar or relocating refugees has led to short-sighted policies which keep people in limbo for years, under emergency humanitarian measures which are supposed to be temporary.

For example, refugees remain consigned to temporary shelters that leak during the monsoon season, are too hot and provide limited ventilation, because of restrictions the Bangladesh government has placed on the materials refugees can use to build homes.

Overcrowding is a major problem – with entire extended families often sharing a single room – and there are serious concerns about sanitation. Refugees reported that drinking water is frequently contaminated and pumps are hard to access.

Refugees also explained how restrictions on their freedom of movement have impeded their ability to seek health care outside the camps - only basic services are available in the camp. Some said they had been asked to pay bribes to obtain permission to leave the camps.

Plans for relocation to Bhasan Char

Current proposals to address the situation for Rohingya refugees, such as relocating up to 100,000 people to Bhasan Char, an uninhabited low-lying island in the Bay of Bengal, pose significant human rights risks and will likely leave refugees more isolated and vulnerable.

Bhasan Char is a silt island that has never been inhabited by people, and is vulnerable to flooding and other extreme weather situations. The Bangladeshi government has repeatedly announced plans to relocate up to 100,000 Rohingya refugees there this year.

One refugee in Kutupalong told Amnesty: “There have never been humans who have lived there, so why would they send us there – because they think we are less human? We do not want to move anywhere else again until we can safely go home.”

“It is essential that any relocation should not isolate or segregate refugees, or further restrict their right. Proposals to relocate Rohingya to Bhasan Char pose serious human rights risks. The island is extremely vulnerable to climate change and is a three-hour boat ride from the mainland. Its isolation is likely to create further barriers to freedom of movement and access to education, health services and legal assistance.”

Amnesty highlighted the urgent need to develop longer term plans and strategies which are firmly embedded in human rights protection. This must include allowing refugees freedom of movement, adequate housing, and access to health care and education. In addition, refugees must have opportunities to seek long term protection in Bangladesh, in line with international law.

Amnesty is also calling on the international donor community to genuinely share responsibility with Bangladesh. Governments must significantly increase and sustain financial and technical assistance to help respond to the needs of the Rohingya refugee population in the country.