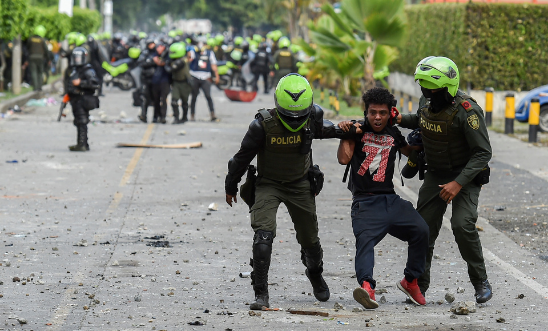 Colombian police officers arrest a demonstrator during a protest against the government in Cali, Colombia, on 4 June, 2021 © AFP via Getty Images

Particularly brutal tactics used in city of Cali, which has large Afro-descendant population

At least 28 people killed between 28 April and 28 June, with approximately 2,000 detained and more than 300 disappeared

‘Young people are full of hatred; they see their friends dying without anything being done’ - Erlendy Cuero

A new report by Amnesty International shows that the Colombian authorities used lethal force to “instil fear” as a means of suppressing recent protests in the country, with particularly brutal tactics used in the city of Cali, an urban area with the second-largest Afro-descendant population in Latin America.

Amnesty’s Digital Verification Corps were able to verify in detail how violent repression of young protesters on the streets of Cali took place.

Amnesty’s 48-page report - Cali: In the epicentre of repression - identified three serious incidents which reflect a clear pattern of using violence by the Colombian authorities, who responded to protests with stigmatisation, criminalisation, unlawful police repression and militarisation.

On 3 May, an operation called “Operation Siloé” saw National Police officers, together with members of the Mobile Anti-Riot Squad and the Special Operations Group of the National Police of Colombia, using lethal weapons - including Tavor 5.56mm rifles and tear gas - against peaceful protesters. At least three deaths from gunshot wounds were recorded during the operation, among them a young man, Kevin Agudelo, while hundreds of people were injured and several arbitrarily detained.

On 9 May, an attack on indigenous Minga (a collective of indigenous peoples participating in the protest) by armed civilians as National Police officers looked on. On that day, 11 indigenous people were injured, including the human rights defender, Daniela Soto.

On 28 May, National Police officials used excessive force in an attack in coordination with armed civilians on demonstrators in the neighbourhood around Valle University. On that day, a dozen young people - including Álvaro Herrera, Noé Muñoz and Sebastián Mejía - were beaten and detained by armed civilians, who then handed them over to the National Police. Herrera and Mejía allege that they were subjected to torture and cruel and inhuman treatment during their unlawful detention.

On 12 July, Amnesty requested information on the three incidents documented in the report from Colombia’s Minister of Defence, the Director General of the National Police and the Attorney General. No response has been received.

Erlendy Cuero, a human rights defender caught up in the conflict on the streets, said:

“The hopes and dreams of our future generations are gradually being extinguished. Young people are full of hatred; they see their friends dying without anything being done. You cannot meet violence with more violence.”

“Terrible injuries were inflicted on hundreds of people, and dozens of young people lost their lives.

“What happened in Cali shows the violent response of the authorities and the true objectives behind this repression: to instil fear, discourage peaceful protest and punish those demanding to live in a fairer country.

“We hope that the police reform process announced by President Duque is not merely a paper promise, and that it includes the reforms ordered by the Supreme Court of Justice in September last year and a change in the repressive modus operandi of the National Police against the peaceful demonstrations.”

On 19 July, President Duque publicly presented “the process for comprehensive transformation of the National Police” which, he claims, has as its pillars the prioritisation of a human rights perspective. Despite this announcement, on 20 July Amnesty received reports that members of the Mobile Anti-Riot Squad again used unlawful force during protests in Bogotá, Barranquilla, Cali and Medellín, injuring several protesters.

Amnesty is calling on the Colombian authorities to issue a ban on the use of lethal weapons to disperse crowds and on the use of tear gas against peaceful assemblies, in accordance with the 30 Rules for the use of chemical irritants in law enforcement published by Amnesty. There must be a thorough, independent and impartial investigation into human rights violations and crimes under international law committed in the city of Cali.