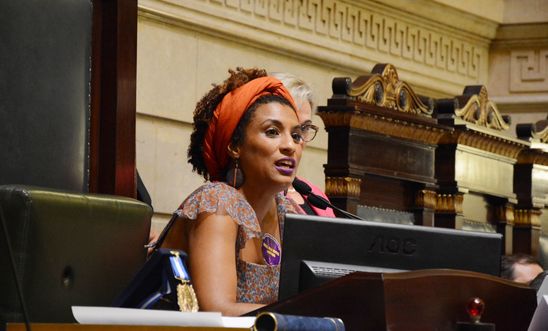 Little progress made in case of murdered Rio councillor Marielle Franco, 18 months on

Amnesty calls for all those responsible, including the instigators, to be brought to justice

“Brazil remains one of the world’s most dangerous countries for human rights defenders” - Jurema Werneck, Amnesty

Amnesty International is stepping up pressure on Brazilian authorities to solve the killings of Rio de Janeiro city councillor Marielle Franco and her driver, Anderson Gomes. A year-and-a-half since they were murdered, authorities have yet to make any meaningful progress in identifying who instigated and orchestrated the crime.

Amnesty has sent letters to the governor of Rio de Janeiro, Wilson Witzel, and the public prosecutor for the state, Dr José Eduardo Gussem, renewing its calls for them to solve the killings and provide up-to-date information on the ongoing police inquiries and investigative actions.

In April 2019, two men were arrested over the murders; an important step towards uncovering the truth and bringing justice to the victims. Since then, however, there has been little progress in the investigation.

“On the day we met - 13 March - the governor vowed to invest energy and resources in solving the murders of Marielle Franco and Anderson Gomes. The state prosecutor made the same commitment, but since then little seems to have been done to discover who killed Marielle and why, nor to ensure that all those involved are brought to justice. This calls into question the authorities’ commitment to swift action.

“We will not rest until the truth is known, until all those responsible for this crime, including its physical perpetrators and its instigators, have been brought to justice in a fair trial, and the state provides protection and psychosocial support for the victims’ Marielle and Anderson’s families.

A courageous human rights defender, Marielle was known for standing up for minority rights, including that of women, black, LGBTI+, and low-paid workers. During her time as the coordinator of the Human Rights Commission of the Legislative Assembly of Rio de Janeiro, she reported on the use of excessive force by the police and helped dozens of victims and their families. As an Afro-Brazilian, openly bisexual women, Marielle represented the most marginalised groups in Brazilian society and stood up against all discrimination.

This Saturday (14 September) marks 18 months since the murder of Marielle and Anderson, and the question of who killed them remains unanswered.

Amnesty has conducted a global campaign calling for justice for Marielle since March 2018 - the first petition amassed 800,000 signatures worldwide and was presented to the Governor of Rio de Janeiro and the President of Brazil, Jair Bolsonaro, in March 2019, a year after the killings.

In April, when the two suspects were arrested, Amnesty took further action to pressure the authorities to continue the investigations until justice is done - the second petition has already collected more than 80,000 signatures in Brazil alone.