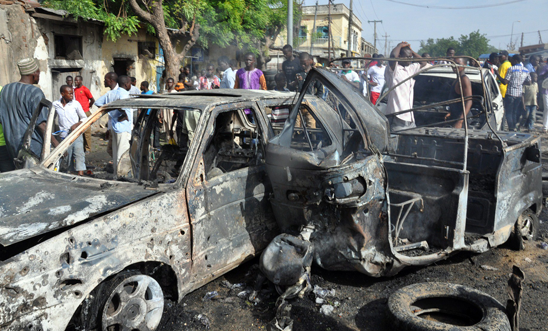 “One year after the abduction of Chibok girls, this underlies the scale and depravity of Boko Haram’s methods” – Salil Shetty, Amnesty International Secretary-General

At least 2,000 women and girls have been abducted by Boko Haram since the start of 2014 and many have been forced into sexual slavery and trained to fight, said Amnesty International on the first anniversary of the abduction of the Chibok schoolgirls.

Based on nearly 200 witness accounts, including 28 with abducted women and girls who escaped captivity, Amnesty’s new 90-page report, 'Our job is to shoot, slaughter and kill': Boko Haram’s reign of terror, documents multiple war crimes and crimes against humanity committed by Boko Haram, including the killing of at least 5,500 civilians, as it rampaged across north-east Nigeria last year and the start of 2015.

The report sheds new light on the brutal methods used by the armed group in north-east Nigeria where men and boys are regularly conscripted or systematically executed and young women and girls are abducted, imprisoned and in some cases raped, forcibly married and made to participate in armed attacks, sometimes on their own towns and villages.

“The evidence presented in this shocking report, one year after the horrific abduction of the Chibok girls, underlines the scale and depravity of Boko Haram’s methods.

“Men and women, boys and girls, Christians and Muslims, have been killed, abducted and brutalised by Boko Haram during a reign of terror which has affected millions. Recent military successes might spell the beginning of the end for Boko Haram, but there is a huge amount to be done to protect civilians, resolve the humanitarian crisis and begin the healing process.”

The report contains graphic evidence, including new satellite images, of the scale of devastation that Boko Haram have left in their wake.

The 276 schoolgirls abducted from Chibok gained global attention with the help of the #BringBackOurGirls campaign. But the missing schoolgirls are only a small proportion of the women, girls, young men and boys abducted by Boko Haram.

Boko Haram take the women and girls they abduct directly to camps in remote communities or to makeshift camps such as one established in Ngoshe prison. From transit camps Boko Haram would move them to houses in towns and villages and indoctrinate them with their version of Islam in preparation for marriage.

Aisha, aged 19, spoke to Amnesty about how she was abducted from a friend’s wedding in September last year along with her sister, the bride and the bride’s sister. Boko Haram took them to a camp in Gullak, Adamawa state, home to approximately 100 abducted girls. One week later, Boko Haram forced the bride and the bride’s sister to marry their fighters. They also taught Aisha and the other women and girls how to fight.

“They used to train girls how to shoot guns. I was among the girls trained to shoot. I was also trained how to use bombs and how to attack a village. This training went on for three weeks after we arrived. Then they started sending some of us to operations. I went on one operation to my own village.”

Aisha said that during the three months that she was held captive, she was raped repeatedly, sometimes by groups of up to six fighters. She also saw more than 50 people killed by Boko Haram, including her sister.

“Some of them refused to convert. Some refused to learn how to kill others. They were buried in a mass grave in the bush. They’ll just pack the dead bodies and dump them in a big hole, but not deep enough. I didn’t see the hole, but we used to get the smell from the dead bodies when they start getting rotten.”

Since the start of 2014, Amnesty International documented at least 300 raids and attacks carried out by Boko Haram against civilians. During their attacks on towns, Boko Haram would systematically target the military or police first, capturing arms and ammunition, before turning on the civilian population. They would shoot anyone trying to escape, rounding up and executing men of fighting age.

Ahmed and Alhaji, aged 20 and 18, were seated with other men, waiting for their throats to be cut after Boko Haram took over Madagali on 14 December 2014. Ahmed told Amnesty that even though his instinct told him to run, he could not. “They were slaughtering them with knives. Two men were doing the killing...We all sat on the ground and waited our turn.” Alhaji only managed to escape when a Boko Haram executioner’s blade became too dull to slit more throats. “Before they got to my group, they killed 27 people in front of me. I was counting every one of them because I wanted to know when my turn would come.” He said that at least 100 men who refused to join Boko Haram were executed in Madagali on that day.

In Gwoza, Boko Haram killed at least 600 people during an attack on 6 August 2014. Witnesses told Amnesty how anyone trying to escape would be pursued. “The motorcycles went to surrounding areas, each street corner, where they will shoot you. They are only shooting the men.”

Thousands fled to the nearby mountains where Boko Haram fighters hunted them down and forced them out of the caves where they were hiding with tear gas canisters. The women were then abducted. The men were killed.

Scorched earth: New satellite images of the destruction of Bama

Satellite imagery commissioned by Amnesty International has enabled the organization to document the scale of devastation wreaked by Boko Haram.

This includes new before and after images of Bama commissioned for the report. These show that at least 5,900 structures, approximately 70 percent of the town, were either damaged or destroyed, including the hospital, by retreating Boko Haram fighters as the Nigerian military regained control of the town in March 2015.

Witnesses interviewed by Amnesty described how Bama’s streets were littered with bodies and how people were burned alive in buildings. One woman said: “When the military got close to the barracks [in Bama] and almost took over, they [the military] later withdrew. Then the insurgents started killing people and burning houses.”

The report documents the reign of terror for those under Boko Haram rule. Soon after taking control of a town, Boko Haram would assemble the population and announce new rules with restrictions of movement, particularly on women. Most households became dependent on children to collect food or on visits by Boko Haram members who offered assistance, distributing looted food.

Boko Haram enforced their rules with harsh punishments. Failure to attend daily prayers was punishable by public flogging. A woman who spent five months under Boko Haram control in Gamborou told Amnesty International how she had seen a woman given 30 lashes for selling children’s clothes and a couple executed publicly for adultery.

A 15-year-old boy from Bama, spared by Boko Haram due to his disability, told Amnesty that he had witnessed 10 stonings. “They stone them to death on Fridays. They will gather all the children and ask them to stone. I participated in the stoning… They will dig a hole, bury all the body and stone the head. When the person dies, they will leave the stones until the body decays.”

The report also highlights growing tensions between Christians and Muslims. Many Christians interviewed by Amnesty believe that Muslims have informed Boko Haram of their whereabouts or failed to share information about impending attacks and this has left a legacy of distrust between communities that previously lived harmoniously side-by-side. Whilst Boko Haram has destroyed churches and killed Christians who refuse to convert to Islam, they have also targeted moderate Muslims.

Amnesty is calling on Boko Haram to stop killing civilians and the Nigerian government to take all possible legal steps to ensure their protection and restore security in the north-east. The international community should also continue to assist the new government of Nigeria in addressing the threat posed by Boko Haram.

“The change of government in Nigeria provides an opportunity for a new approach to security in Nigeria after the dismal failure of recent years.

“The abducted must be rescued, war crimes and crimes against humanity must be investigated. Bodies must be disinterred from mass graves, further killings must be prevented and those guilty of inflicting this unspeakable suffering must be brought to justice.”

The information on Boko Haram documented by Amnesty should be considered by the International Criminal Court to as part of its ongoing preliminary examination of the situation in north-east Nigeria.

Amnesty has raised concerns on a number of occasions that security forces are not doing enough to protect civilians from the appalling human rights abuses committed by Boko Haram. There have been very few effective investigations and prosecutions of Boko Haram members for crimes under international law.

The report draws on 377 interviews, including 189 with victims and eye-witnesses to attacks by Boko Haram; 22 with local officials; 22 with military sources; and 102 with local activists. The testimony comes from women, men and children, both Muslims and Christians. Almost all people interviewed asked not to be identified for security reasons; therefore all names used in the report are pseudonyms.

Amnesty collected this evidence in the course of four research trips in 2014 and 2015 to Maiduguri, camps for internally displaced people in north-east Nigeria and a refugee camp in northern Cameroon. Numerous interviews were also conducted by phone from London.

Amnesty has documented 38 cases of abduction by Boko Haram. It has gathered 77 testimonies on abductions, including with 31 eyewitnesses and with 28 women and girls who were abducted by Boko Haram and escaped.

Downloads
'Our job is to shoot, slaughter and kill': Nigeria and Boko Haram report