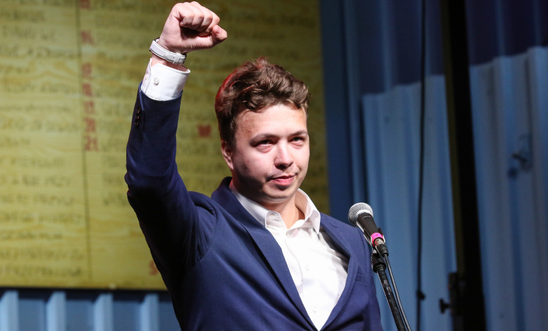 “They have been unlawfully arrested and arbitrarily prosecuted for non-existent crimes, and justice will not be served until they are unconditionally released.

“This looks like a cynical ploy by the Belarusian authorities to secure the lifting of international sanctions which were imposed after Roman and Sofya’s arrests.

“Over the past year, the world has watched in horror as Alyaksandr Lukashenka’s government crushes peaceful dissent with unspeakable cruelty – these transfers to house arrest change nothing. We reiterate our call on the international community to do their utmost to end the human rights crisis in Belarus.

“We call on the Belarusian authorities to release Roman Protasevich and Sofya Sapega immediately and unconditionally. They must allow them to leave Belarus if they choose to do so, and if they remain in the country, the authorities must guarantee there will be no further reprisals against them.”

This morning, Roman Protasevich’s father Dmitry reported that his son and his son’s partner Sapega had been moved to house arrest. Dmitry Protasevich added that he and his wife had not yet been allowed to see the couple.

On 23 May, Roman Protasevich, the former editor-in-chief of the Telegram channels NEXTA and NEXTA Live, was detained at Minsk airport after his Lithuania-bound flight made an emergency landing while escorted by the Belarusian Air Force’s MiG-29. His partner, Sofya Sapega, a Russian national, was detained alongside him.

The pair were charged with “incitement of mass riots”, “gross violation of public order” and “incitement of social hatred” against public officials and law enforcement agents, and face up to 15 years in prison. The allegations are false, and arose in connection with peaceful mass protests that have been brutally crushed by the authorities.

In late May and early June, Belarussian state TV aired televised “confessions” by Protasevich and Sapega, which Amnesty believes were forced and made under duress, amounting to ill-treatment under international law.