Belarus: journalist must be released after 'chilling' forced landing of Ryanair flight 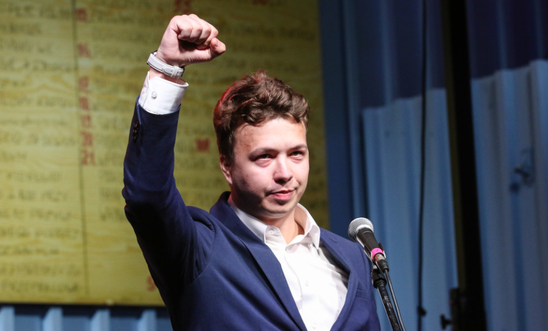 ‘This apparent act of air piracy is chilling’ - Marie Struthers

Responding to the apprehension of the prominent Belarusian journalist Roman Protasevich - former editor-in-chief of the Telegram channel NEXTA - after his Ryanair flight from Greece to Lithuania was forced to make an emergency landing in the Belarus capital Minsk this afternoon, Marie Struthers, Amnesty International’s Eastern Europe and Central Asia Director, said:

“This apparent act of air piracy is chilling.

“There is little doubt that the Belarusian authorities used a false bomb threat and a MiG fighter jet to force an airplane flying from one country of the European Union to another to land with the apparent sole purpose of detaining an exiled critical journalist whom they badly wanted silenced.

“The European Union and the rest of the world must react without delay and call for the immediate release of Roman Protasevich.

“He should be allowed to leave Belarus and travel to the country of his choice.”

Earlier today, Roman Protasevich, 26, who until last September led the biggest Belarusian opposition Telegram channels - NEXTA and NEXTA Live - was detained at Minsk airport after his Lithuania-bound flight made an emergency landing following a supposed bomb threat which was promptly reported as false.

A Belarusian Air Forces MiG-29 fighter jet “escorted” the Ryanair plane to the airfield in Minsk.

Last year, NEXTA and its sister channels were declared “extremist” and banned in Belarus as part of a crackdown on peaceful dissent after the disputed results of the 9 August presidential elections. Protasevich and his associate Stsyapan Putsila were arbitrarily added to a list of “individuals involved in terrorist activity.” The two were also charged with “incitement of mass riots”, “gross violation of public order” and “incitement of social hatred” against public officials and law-enforcement agents - offences with penalties of up to 15 years in prison.

Last week, Amnesty said that Belarus’s Ministry of Information’s blocking of a leading Belarusian news site TUT.by was part of a “full-scale assault on the right to freedom of expression and media freedom” in the country.