Belarus: 'No end in sight' to horrific 'human rights crisis' in the country 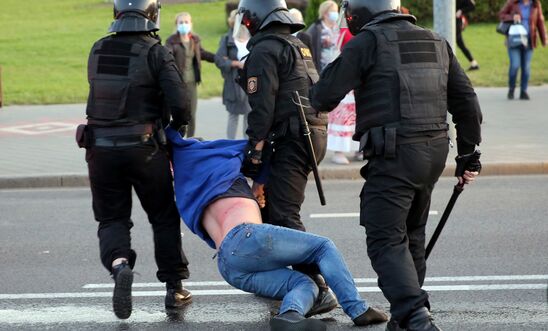 Riot police officers detain a man during an opposition rally to protest against the presidential inauguration in Minsk on September 23, 2020 © TUT.BY/AFP via Getty Images

Tens of thousands of people subjected to arbitrary arrests and detention

Following last year’s widely disputed presidential election, Belarusian authorities have unleashed a campaign of brutal reprisals and committed a plethora of human rights violations and crimes under international law against the country’s people.

“The unfolding human rights crisis in Belarus is a saga of horror and despair with no end in sight.

“Over the last year, thousands of peaceful protesters and people with dissenting views have been arbitrarily detained, forced into exile or left living in fear of arbitrary prosecution and imprisonment.

“Hundreds have already been named criminal suspects or convicted and sent to prison for long terms, including a child.

Violations by the Belarusian authorities include unlawful use of force, arbitrary detention, torture and other ill-treatment, enforced disappearances and abductions, and politically motivated prosecutions under trumped-up charges.

Dozens of human rights NGOs and other civil society organisations have been arbitrarily closed and many of their staff have been arrested as suspects in fabricated criminal cases or forced into exile.

At least three peaceful protestors have died because of police force, while tens of thousands were subjected to arbitrary arrests and detention. Hundreds more have complained of torture.

These violations have not been investigated and suspected perpetrators have not faced any charges.

Amnesty has closely followed developments in Belarus over the last year, and produced a report revealing how the Belarusian authorities have used the justice system as a repressive tool to punish survivors of torture rather than suspected perpetrators.