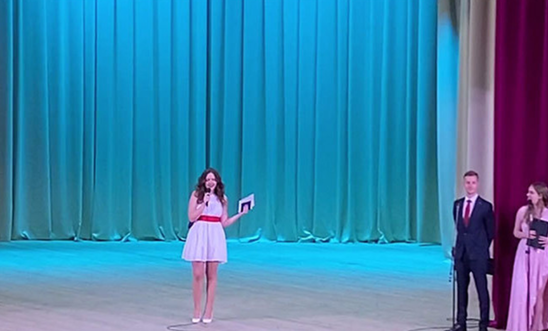 ‘I wish each of us to love, defend and stand up for the rule of law’ - Katsyaryna Vinnikava

‘The Belarusian authorities must stop fighting their own people’ - Marie Struthers

Amnesty International is calling for the immediate release of a Belarusian student jailed for 15 days after making a graduation speech in which she honoured past staff members and graduates who have faced reprisals for supporting peaceful protests in the country.

Earlier this week (29 June), Katsyaryna Vinnikava - a student in the Law Faculty of the Belarusian State University - gave a graduation speech which included the words:

“I wish each of us to love, defend and stand up for the rule of law with the honour and dignity of a real lawyer, regardless of the current difficulties and the difficulties that are to come. Know the law, believe in the law. […] Please remember that law is the art of kindness and justice. And kindness, reason and human dignity together always win.”

Vinnikava also paid tribute to former faculty staff members and lawyers who have “shown by their example who a lawyer was and what law was” - including former professors Alena Basalay and Alena Layeuskaya, who have been sacked for their views, and the lawyer Maksim Znak, who was arrested last September on charges of “conspiracy to seize power” and “creation of an extremist group”.

According to Vinnikava’s friends, on 30 June she was summoned to the Leninsky District Department of Internal Affairs in Minsk, interrogated for seven hours and detained the following morning. She was denied access to her lawyer. Vinnikava was charged with “holding an unauthorised rally” (Article 23.34 of the Code of Administrative Offences).

Yesterday, Vinnikava’s dormitory room was searched and her laptop confiscated. Earlier today, a court in Minsk sentenced the student to 15 days in administrative detention. She is currently held at the notorious Akrestsina detention centre.

In May, Amnesty reported how hundreds of students in Belarus have been punished for protesting against last year’s disputed presidential election. In October, President Lukashenka called for universities to dismiss students who took part in protests.

“The Belarusian authorities have once again shown their determination to stifle all dissent.

“Katsyaryna Vinnikava must be released immediately and unconditionally, and all proceedings against her must be terminated.

“The Belarusian authorities must stop fighting their own people and put an end to politically-motivated repression.”