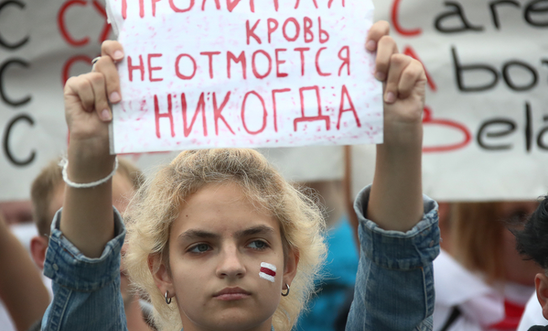 Statements made by the Belarusian authorities ahead of “Freedom Day” mass demonstrations planned for tomorrow raise serious concerns that the police response to peaceful protests will again be extremely violent, said Amnesty International today.

With many journalists in Belarus already jailed, Amnesty is calling on diplomatic representatives in the country to monitor protests and live-stream events, using their diplomatic immunity to expose expected police violence.

Amnesty is also calling on businesses operating in Belarus to conduct urgent human rights due diligence to ensure they do not cause or contribute to human rights violations in the country.

Tomorrow, Amnesty activists around the world will hold protests outside Belarusian embassies and share messages of solidarity with the country’s peaceful protesters.

Thursday 25 March, known as Freedom Day, is an unofficial public holiday marking Belarus’ declaration of independence in 1918, and this year it is expected to be marked by nationwide protests. Svyatlana Tsikhanouskaya, Belarus’s exiled leading opposition figure, has called for global solidarity with Belarusians on this day.

Law-enforcement and government figures have made alarming statements indicating the possibility of a violent response. Belarus’ Deputy Minister of Internal Affairs, Mikalai Karpenkau, described protesters as “fascist henchmen” and threatened to “deal with them” in a way “already worked out” - an apparent reference to a months-long crackdown which has seen protesters beaten, detained, tortured and arrested in large numbers. In January, a leaked audio recording appeared to show Karpenkau telling subordinates to disregard international human rights law when dealing with protesters, condoning shooting protesters in the head with rubber bullets.

On 9 March, the Chair of the State Security Committee, Ivan Tsertsel, claimed during a meeting with President Lukashenka that “specific persons” are planning “to destabilise” the country on 25 March. Tsertsel said “fugitives” and “foreign special services” were behind the planned protests. Tsertsel has repeatedly been quoted by state media threatening “harsh” responses to protests during this period, saying the authorities were preparing “for a hot war.”

“The message from the top in Belarus is clear: any exercise of the right to freedom of peaceful assembly or expression will be ruthlessly crushed.

“World leaders should urge their diplomatic representatives in Belarus to monitor protests on 25 March and to live-stream events.

“International representatives can tell the stories for which Belarusian journalists have been imprisoned for sharing. It is essential that the abuses unfolding in Belarus continue to be exposed.

“If telecom companies are unable to prevent internet or mobile coverage shutdown, they should mitigate adverse impacts to the extent possible, for instance by informing users in advance, limiting the duration and geographic spread of the disruption, and finding ways to reduce impact on the most vulnerable and essential services such as hospitals.”

Over the past eight months, the Belarusian government has presided over a human rights crisis marked by mass arbitrary arrests, imprisonment of journalists, unlawful use of force during protests, and torture and killing of peaceful protesters.

During the crackdown on peaceful protests that started on 9 August, Belarusian police have used rubber bullets, stun grenades, chemical irritants, water cannon and other less-lethal weapons against peaceful protesters, resulting in at least four deaths and countless serious injuries. More than 30,000 demonstrators have been detained, and scores of women and men have been subjected to torture and other ill-treatment. At least one person is known to have died in detention. To date, criminal proceedings have not been instigated against a single police officer in connection with the violations.