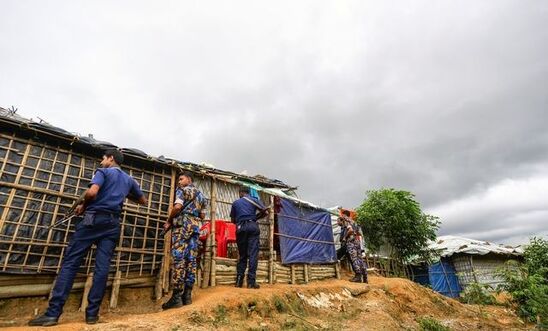 Violent clashes have broken out between gangs over the trade of drugs in Cox’s Bazar, triggering at least 2,000 refugees to flee to other camps

Bangladeshi authorities must protect Rohingya refugees following violent clashes between armed criminal gangs that have killed at least eight people and injured hundreds of others in Cox’s Bazar over the past week, Amnesty International said today.

At least 2,000 Rohingya refugees have been forced to flee their shelters to other camps since violence broke out between two rival factions seeking to control the trade of illegal drugs inside the camps. On 7 October, around a dozen shelters in Kutupalong refugee camp were burned to the ground.

Rohingya refugees are also afraid that Bangladesh’s government could use the ongoing violence as a pretext to relocate them to Bhashan Char, a remote silt island in the Bay of Bengal that has yet to complete the United Nations' assessment for safe habitation.

“The situation inside the camps is highly precarious and, unless the authorities take the necessary action to quell the violence and protect refugees, there’s a serious risk of further bloodshed.

“Those suffering most are the Rohingya refugees caught in the middle. The Bangladeshi authorities must heighten security inside the camps as long as necessary to ensure their safety and launch an immediate and impartial investigation into the violence to bring those responsible to justice.

“Relocating the refugees to Bhashan Char will neither end their current insecurity nor bring about a durable solution to the refugee crisis. Instead, authorities must engage with the Rohingya refugees, take note of their concerns and ensure participation in the decisions that affect them.”

In September, Amnesty released its report Let Us Speak For Our Rights, calling on Bangladesh's government and the local and international community to work together to develop a publicly accessible, transparent and rights-respecting policy document to ensure the representation of Rohingya refugees in decisions that affect them.

This week Rohingya refugees told Amnesty that the clash broke out between a group that has been operating a drug cartel within the refugee camp and another armed group called the Arakan Rohingya Salvation Army (ARSA) as they vie for control of the camps. The violence reportedly started after negotiations over a partnership between the two groups broke down. Local media reports say that both groups have been using locally made guns and iron bars.

The Bangladeshi authorities dispatched additional security to the camps on 6 October, but violence has continued. Last month, AKM Mozammel Huq, a Bangladeshi government minister, said that watchtowers and close circuit television cameras would be installed to increase surveillance inside the camps.

Violence was also sparked by a battle for control over the trade of methamphetamine or ‘crystal meth’, manufactured in Myanmar and smuggled into Bangladesh. In light of the Bangladeshi government’s violent ongoing crackdown on the illegal drug trade - which includes allegations of extrajudicial executions - there are fears among refugees that the intensifying clashes are putting everyone in the camps at even greater risk.

According to Bangladesh's human rights organisation Odhikar, the Bangladeshi authorities killed more than 100 Rohingya refugees in alleged extrajudicial executions between August 2017 and July 2020, purportedly in crackdowns on the illegal drug trade in Cox's Bazar.