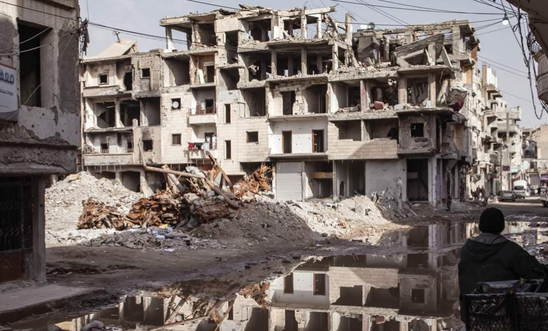 Amnesty International’s open-source investigation into the US-led Coalition’s bombing of the Syrian city of Raqqa has won a Times Higher Education award.

The investigation helped reveal how the Coalition’s four-month military offensive against the Islamic State armed group in Raqqa in 2017 killed at least 1,600 civilians.

At an awards event in London last night, Amnesty and the University of Essex were given this year’s Times Higher Education award for International Collaboration.

“Open-source investigations have really come into their own, bringing invaluable depth and context to journalism, litigation and other fields.

“Whether it’s gathering digital evidence of potential war crimes or verifying content in real-time amid the recent wave of protest crackdowns in countries including Hong Kong, Iraq and Chile, this collaboration has pioneered some of the most cutting-edge human rights research in the world today.

“What the dozens of students in Amnesty International’s Digital Verifications Corps at Essex and our five other university partners do, is bring the same rigour and methodology to investigate some of the most pressing human rights issues of our time, to bring justice to the victims and hold perpetrators to account.”

The Times Higher Education award for best international collaboration was made to the Digital Verification Corps and Essex DVU, as well as the other DVC partners for their joint open source investigative work on Raqqa, Syria. The findings from this fed into a ground-breaking wider investigation by Amnesty and Airwars, published in April.

Ahead of a NATO meeting to be held in the UK next week, Amnesty has called on delegates to the meeting to ensure NATO “gets its own house in order” amid evidence that NATO member states Turkey and the USA - as well as the UK and France - have been responsible for possible war crimes in Syria, including in the bombardment of Raqqa.