UK: call for NATO to 'get own house in order' over Syria attacks 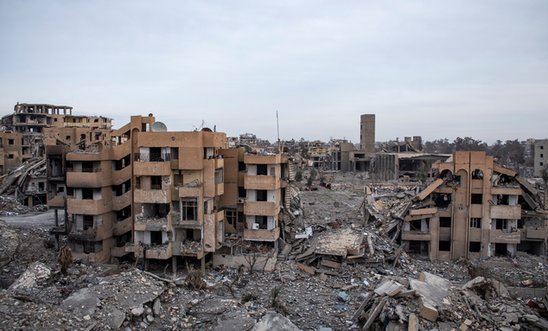 ‘Does NATO care about the beleaguered civilians of northern Syria?’ - Kristyan Benedict

Amnesty International is warning world leaders attending next week’s NATO meeting in the UK that the military alliance needs to “get its own house in order” amid mounting evidence that NATO member states Turkey and the USA - as well as the UK and France - have been responsible for possible war crimes in Syria.

The two-day meeting (3-4 December), which is being held in the Hertfordshire countryside near Watford and is part of NATO’s 70th anniversary events, is expected to focus on funding, cybersecurity and the threats posed by terrorism.

However, Amnesty is urging NATO delegates to address mounting evidence that both Turkish and US-led military forces (including UK and French ones) have carried out widespread disproportionate and indiscriminate attacks in Syria which have killed hundreds of civilians.

Last month, Amnesty reported how Turkish forces - and their allied armed groups in Syria - had carried out indiscriminate attacks in residential areas of northeast Syria. Early reports from Turkey’s military offensive put the civilian death toll at more than 200, while gruesome videos and other evidence emerged showing the summary killing by pro-Turkish forces of civilians and captured fighters. A number of civilians in Turkey have also been killed in indiscriminate attacks launched from northeast Syria by armed Kurdish groups.

Meanwhile, evidence published earlier this year by Amnesty and Airwars shows that at least 1,600 civilians were killed during the US-led Coalition’s four-month aerial and artillery bombardment of the Syrian city of Raqqa in 2017. The military campaign by the Coalition - which NATO itself is part of - to oust Islamic State from Raqqa was one of the most destructive in modern warfare, leaving 80% of the city destroyed or damaged.

Unlike Amnesty, which spent more than two months in Raqqa investigating the impact of the Coalition’s strikes on the city’s residents, the Coalition itself refuses to carry out such on-the-ground investigations and routinely dismisses Amnesty’s findings.

“NATO needs to get its own house in order when it comes to mounting evidence of possible war crimes committed by its member states in Syria.

“If Turkey and the US-led Coalition’s disproportionate and indiscriminate bombing campaigns in Syria are passed over in silence by NATO members, what does it then say about NATO’s respect for international humanitarian law?

“We have a simple question - does NATO care about the beleaguered civilians of northern Syria? If so, what has NATO got to say about its own members’ disgraceful flouting of human rights and the rule of law in Syria?”