Ai Weiwei, Catherine Deneuve, Bianca Jagger and Peter Greste among those calling for end to case against Amnesty Turkey 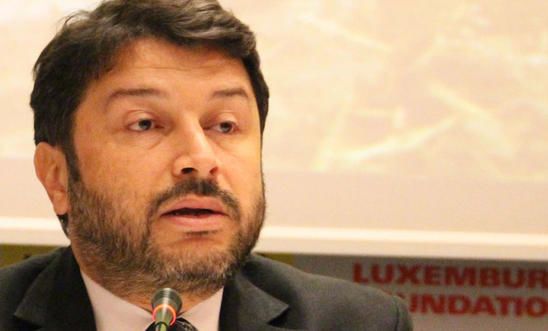 Taner Kılıç, Amnesty Turkey's Chair, has been behind bars for nearly six months

As trial of ‘Istanbul 10’ and Chair of Amnesty Turkey resumes, more than 70 signatories to open letter call for case against 11 human rights activists to be dropped

In the letter (see full text and list of signatories below), the group say they’re “proud” to add their voices to “the global demand to end this gross injustice”.

Amnesty’s Turkey Chair, Taner Kılıç, was arrested on 6 June, jail three days later and remains in detention. Meanwhile, ten other activists, including İdil Eser, the Director of Amnesty Turkey, were detained a month later. Seven of them were remanded in Turkey’s high-security Silivri Prison for almost four months, with one remanded in Ankara's Sincan Prison. The eight were held for almost four months and released last month at their first hearing. They are all accused of “membership of a terrorist organisation”.

Ruth Breddal, Amnesty International UK’s Chair, who is going to be part of an Amnesty delegation in Turkey on Wednesday to observe proceedings, said:

“It’s been really shocking to see our Amnesty colleagues in Istanbul hauled before the courts and appalling to see the crackdown in Turkey spread its tentacles into so many areas of Turkish life.

“We need to see an end to the arbitrary round-ups of human rights activists and journalists in Turkey, and for charges to be dropped against them unless there’s clear evidence that an actual crime has been committed.

“Standing up for human rights shouldn’t be a matter for the courts, and nor should working as a journalist. The sooner this ridiculous case against our hard-working colleagues in Turkey is brought to an end, the better.”

Amnesty and representatives of various trade unions will stage a demonstration outside the Turkish Embassy in London between 11am-12 noon today (22 November), at which protesters wearing Taner Kılıç face masks will demand an end to the case.

Mr Kılıç is alleged to have downloaded and used the ByLock messaging application, which the prosecution has claimed was used by the Gülen movement to communicate with each other. However, two independent forensic analyses of Kılıç’s phone commissioned by Amnesty found no trace of ByLock ever having been on his phone. To date, the prosecution hasn’t provided any evidence to support their claim. The forensic expert who prepared the detailed Amnesty reports is expected to appear at the trial on 22 November.

The Istanbul 10 were attending a workshop on wellbeing and digital security on 5 July when police raided the building and detained them all. On 4 October, an Istanbul prosecutor filed an indictment against the Istanbul 10 and Taner Kılıç, who, it is claimed, was aware of preparations for the workshop and was in contact with İdil Eser and another of the defendants. At his trial on 26 October, the judge accepted the prosecutor’s application to join Kılıç’s case with that of the other ten.

Globally, more than 700,000 people have supported Amnesty’s campaign for the release of Kılıç and the dropping of the charges against the Istanbul 10. Campaigners are currently supporting the 11 via Amnesty’s “Write for Rights” campaign.

Growing list of those calling for end to case

The 70-plus signatories to the open letter join a long list of governments, institutions and political figures to have demanded Kılıç’s release - including the European Commission, the US State Department, UN officials, Angela Merkel and the German government, as well as the Austrian, Irish and Belgian governments. Meanwhile, more than 30 UK MPs have signed a parliamentary motion calling for the immediate release of Kılıç and the dropping of charges against all 11. This follows similar calls last month by 22 members of the US Congress, including 14 Senators, as well as the Secretary General of the Council of Europe, Thorbjørn Jagland, the President of the European Parliament, Antonio Tajani, and the Chair of the Human Rights Committee in the European Parliament, Pier Antonio Panzeri. Last month in Parliament, Prime Minister Theresa May said the UK Government was “publicly calling on Turkey to protect freedom of expression and to release those defending human rights”.

OPEN LETTER AHEAD OF TRIAL OF TANER KILIC AND ISTANBUL 10

On Wednesday the trial of 11 human rights defenders including Taner Kılıç, and İdil Eser the chair and director of Amnesty International Turkey, will resume in Istanbul.

The 11 face outlandish “terrorism” charges in what can only be described as a politically-motivated prosecution aimed at silencing critical voices within the country. If convicted they could face jail terms of up to 15 years. This sends a chilling message not just to people in Turkey but around the world.

With many people unfairly imprisoned as part of the crackdown following the bloody coup attempt in Turkey - including journalists, lawyers and civil society leaders - some may ask: why focus on these 11 people? The answer is simple: when human rights defenders are silenced, all our rights are put at risk. They are the ones that stand up for us. Now we must stand up for them.

We are proud to add our voices to the global demand to end this gross injustice and to immediately and unconditionally release Taner Kılıç from jail.

The Turkish authorities must know that the eyes of the world will be on Istanbul’s central court for this trial. We will not stay silent. Defending human rights is not a crime.