Evidence of global opposition to US mass surveillance 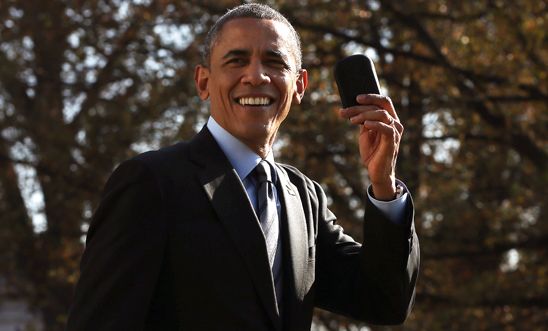 President Barack Obama holds up his Blackberry after forgetting it while departing for a domestic trip, Washington DC, 2012 © 2014 Getty Images

Our research shows that around the world, the public don’t want to be spied on by the United States. But it’s happening – every day, the US National Security Agency (NSA) intercepts, accesses and stores data from our phones, computers and other hardware that lets them know the most intimate details of our lives – and it’s being done on a needlessly mass scale.

‘We’ve got agencies looking through webcams into people’s bedrooms, and they’re collecting billions of cell phone locations records a day. They know where you got on the bus, where you went to work, where you slept, and what other cell phones slept with you.’
Edward Snowden

In June 2013, former NSA contractor Edward Snowden blew the whistle on some of the NSA’s practices and revealed that the agency has been authorised to monitor phone and internet on a mass scale in 193 countries.

The NSA stores 5 billion mobile phone location records every day. It has the capacity to store the records, including email and browsing history, of 42 billion internet users every month. Its agents pass on 200 million text messages to our security services here in the UK every single day.

Security doesn't have to come at the expense of privacy

'The people looking at this data are looking for criminals. You could be the most innocent person in the world, but if somebody programmed to see patterns of criminality looks at your data, they’re not going to find you – they’re going to find a criminal.'
Edward Snowden

While security agencies may be looking for criminals, we still have the right to be presumed innocent until proven guilty, and we have the right to privacy. Properly targeted surveillance is a legitimate and arguably necessary tool to protect national security: the problem is mass data collection, which tramples on the rights of the very people that targeted surveillance tactics are meant to protect.

Our governments need to suspect that we have done something wrong before restricting our freedom. And private data can be used to target journalists, persecute activists, profile and discriminate against minorities and crack down on free speech.

‘The message is clear: even citizens of the United States’ closest allies do not want their internet use recorded by governments. The UK and other Five Eyes countries should be open with their own people about how they are sharing the spoils of surveillance – our personal data.’
Salil Shetty, Amnesty Secretary General

We asked 15,000 people from 13 countries across every continent how they felt about being monitored by the United States’ government programme, the National Security Agency (NSA).

71% of respondents globally were strongly opposed to the United States monitoring their internet and mobile phone use.

In the UK, 63% of people we asked said they were opposed to US mass surveillance schemes – and only 21% were happy being tracked by mass internet and phone data-gathering programmes run by the US government.

The US shares the results of its mass surveillance programme with secret intelligence agencies in the UK, Australia, Canada and New Zealand under the so-called Five Eyes Alliance. And in these countries, more than three times as many people oppose US surveillance (70%) as support it (17%).

Right now, governments want us to accept that we don’t have rights when we’re online. That somehow, when we pull out our smartphone or sign in to our email, everything we do or say belongs to them. We wouldn’t allow this level of intrusion into our offline lives, so let’s not stand for it online.